The world obsesses over worship. Workaholics pour their waking moments into obtaining the all-important nest egg. Intellectuals strive after ideologies that master the transcendent mysteries of the universe. Muslims are taught by their Koran to compel obedience to their god through intimidation and murder.[i] These are only some of the ways that world’s worship bows down and renders service to what’s perceived as worthy.

The world’s worship ranges from venial to noble. It can be found it in the mountain monasteries of the Buddhist monks and the American football stadium on Sunday afternoon. Obsessions of the world are all too often nothing more than counterfeit worship. The devil and his demons are intent on making sure that every ounce of your attention is consumed.[ii] They’ll give you anything but the true God to fear, love, and trust.

What about the Christians? Don’t they worship the real God? Even the trappings of Christian worship can deteriorate into pagan sacrifice. How? By thinking the offerings of time, attention, money, and works demanded by the demons are also what God desires. This captivity to works has also borne the name “Christian worship.” This was the state of Christendom at the time of the Lutheran Reformation. Men, women, and children were coerced to pay priests to render the sacrifices of the mass so they could be saved from an angry and vengeful God. They agonized over the obedience and works of righteousness demanded by the papacy, even to the point of despair.

What was neglected was the one thing needful: a Savior who paid the price for sin. Thanks be to God that he will not suffer his Word to be silent. For the sake of mercy, not sacrifice, he sent faithful pastors like Luther, who held forth the incarnate Son of God promised by the Prophets, Apostles, and Evangelists. The proclamation of Jesus’ Word is the center and foundation of authentic Christian worship.

It’s been remarked that Luther and the Lutheran Reformation didn’t have an explicit or sophisticated theology of worship.[iii] This seems to be fair, as Luther never goes out of his way to articulate an  liturgical philosophy to govern the rites and rituals of the church. Nor does he spend protracted time researching and pouring over the words “worship” and “liturgy” to establish an independent theological concept. Instead, Luther rejoiced in preaching repentance and faith, Law and Gospel, and expounding upon Christ’s institutions of Baptism and the Supper. You can find all this summed up in his Small and Large Catechisms.[iv]

You might think this fixation on preaching Jesus might lead to a neglect of the liturgy. Maybe people would talk about theology, but never actually make it to church. Does neglect of “liturgical theology” lead to a neglect of the liturgy? Not for the reformers. As the princes at Augsburg confessed, “Our churches are falsely accused of abolishing the Mass. In fact, the Mass is retained among us and is celebrated with the greatest reverence.”[v] But this wasn’t a “mass” held captive to the doctrines of men which denied the blood of Jesus to the people. Nor did it imagine that meriting God’s favor without faith could be accomplished through the magical performance of churchly rites.

Luther explains, “We therefore first assert: It is not now nor ever has been our intention to abolish the liturgical service of God completely, but rather to purify the one that is now in use from the wretched accretions which corrupt it and to point out an evangelical use. We cannot deny that the mass, i.e., the communion of bread and wine, is a rite divinely instituted by Christ himself and that it was observed first by Christ and then by the apostles, quite simply and evangelically without any additions.”[vi] You can see Luther’s desire to resist anything that conflicted with Christ’s institutions in the Scriptures. Luther was confident that as long as the Scriptures and their doctrine was preached and believed, Christian worship would necessarily happen. He writes, “And this is the sum of the matter: Let everything be done so that the Word may have free course instead of the prattling and rattling that has been the rule up to now. We can spare everything except the Word.”[vii]

Jesus established an office in the world for forgiving sins (John 20:21–23). He established his Baptism and Supper to be received in the lives of real people (Mark 16:16; Matt. 26:26-29; Mark 14:22-25; Luke 22:14-20; 1 Cor. 11:23-26) and not merely to be objects of contemplation. Luther writes, “Places, times, persons, and the entire outward order of worship have therefore been instituted and appointed in order that God’s Word may exert its power publicly.”[viii] What does it look like when God’s Word exerts its power publicly? Babies are baptized. Sins are forgiven. The Scriptures are preached and prayers and hymns spring off Christian lips. It looks like the Divine Service you attend every Sunday!

True Christian worship is under attack. “For where God’s Word is preached, accepted, or believed, and bears fruit, there the holy and precious cross will also not be far behind.”[ix] Sufferings in this life must come. The demons rage when their counterfeit worship is displaced by godly preaching. The world loves placating their false gods too much to tolerate the call to repentance. Concerning these enemies of Christ, Philip Melanchthon writes, “Nowhere do they teach that sins are pardoned freely for Christ’s sake and that by this faith we may obtain the remission of sins. Thus they obscure the glory of Christ, rob consciences of sure consolation, and destroy true worship, that is, the exercise of faith wrestling with despair.”[x] 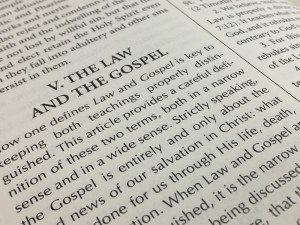 The Rev. A. Brian Flamme is a pastor at Hope Lutheran Church, Aurora, CO.

[i] Koran 9:5. Besides the Koran itself demanding the repentance of unbelievers through violence, Martin Luther identifies the connection between Islam and murder in 1529. In On War Against the Turk, Luther saw that proselytization into the Muslim faith often came at the edge of the sword. He writes, “Thus when the spirit of lies had taken possession of Mohammed, and the devil had murdered men’s souls with his Koran and had destroyed the faith of Christians, he had to go on and take the sword and set about to murder their bodies. The Turkish faith, then, has not made its progress by perching and the working of miracles, but by the sword and by murder…” (LW 46:179). Though there are certainly “moderate Muslims” who resist violence against unbelievers, they are inconsistent with critical elements of Mohamed’s own history of pushing his novel faith on others through bloodshed on the Arab Peninsula not to mention the clear precepts of the Koran. I believe that Luther’s assessment of Islam’s murderous pretentions remains accurate and instructive for Christians today.

[ii] In Luther’s explanation of the Third Petition of the Lord’s Prayer, Luther identifies the work of the devil as fighting against God’s will: That his kingdom would come into our lives through the preaching of his Word. See also 1 Timothy 4:1

[iv] The best places in the Catechisms to learn about Lutheran worship would be the first three Commandments, the Third article of the Creed, the first three Petitions of the Lord’s Prayer, and, of course, the sections on Baptism and the Lord’s Supper. There you’ll find everything that you need to know about what worship was all about for the reformers. Thanks be to God that it continues to be our confession today!