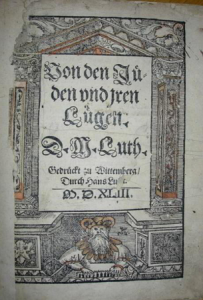 While The Lutheran Church—Missouri Synod holds Martin Luther in high esteem for his bold proclamation and clear articulation of the teachings of Scripture, it deeply regrets and deplores statements made by Luther which express a negative and hostile attitude toward the Jews. In light of the many positive and caring statements concerning the Jews made by Luther throughout his lifetime, it would not be fair on the basis of these few regrettable (and uncharacteristic) negative statements, to characterize the reformer as “a rabid anti-Semite.” The LCMS, however, does not seek to “excuse” these statements of Luther, but denounces them (without denouncing Luther’s theology).

In 1983, the Synod adopted an official resolution addressing these statements of Luther and making clear its own position on anti-Semitism. The text of this resolution reads as follows:

WHEREAS, Anti-Semitism and other forms of racism are a continuing problem in our world; andWHEREAS, Some of Luther’s intemperate remarks about the Jews are often cited in this connection; and

WHEREAS, It is widely but falsely assumed that Luther’s personal writings and opinions have some official status among us (thus, sometimes implying the responsibility of contemporary Lutheranism for those statements, if not complicity in them); but also WHEREAS, It is plain from scripture that the Gospel must be proclaimed to all people–that is, to Jews also, no more and no less than to others (Matt. 28:18-20); and

WHEREAS, This Scriptural mandate is sometimes confused with anti-Semitism; therefore be it

Resolved, That we condemn any and all discrimination against others on account of race or religion or any coercion on that account and pledge ourselves to work and witness against such sins; and be it further

Resolved, That we reaffirm that the bases of our doctrine and practice are the Scriptures and the Lutheran Confessions and not Luther, as such; and be it further

Resolved, That while, on the one hand, we are deeply indebted to Luther for his rediscovery and enunciation of the Gospel, on the other hand, we deplore and disassociate ourselves from Luther’s negative statements about the Jewish people, and, by the same token, we deplore the use today of such sentiments by Luther to incite anti-Christian and/or anti-Lutheran sentiment; and be it further

Resolved, That in our teaching and preaching we take care not to confuse the religion of the Old Testament (often labeled “Yahwism”) with the subsequent Judaism, nor misleadingly speak about “Jews” in the Old Testament (“Israelites” or “Hebrews” being much more accurate terms), lest we obscure the basic claim of the New Testament and of the Gospel to being in substantial continuity with the Old Testament and that the fulfillment of the ancient promises came in Jesus Christ; and be it further

Resolved, That we avoid the recurring pitfall of recrimination (as illustrated by the remarks of Luther and many of the early church fathers) against those who do not respond positively to our evangelistic efforts; and be it finally

Resolved, That, in that light, we personally and individually adopt Luther’s final attitude toward the Jewish people, as evidenced in his last sermon: “We want to treat them with Christian love and to pray for them, so that they might become converted and would receive the Lord” (Weimar edition of Luther’s Works, Vol. 51, p. 195).