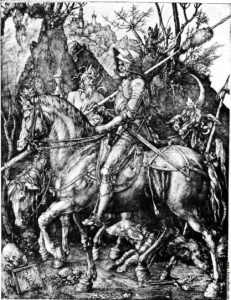 Who is the Rider? Although Albrecht Dürer’s “Knight, Death, and the Devil” has been acclaimed as one of Europe’s greatest masterwork engravings since its publication in 1513, it has also been one of the most provocative pieces of art in the past 500 years. All agree that the copper engraving is technically stunning, but the interpretation of the Rider has been and continues to be greatly debated. Some say it depicts the virtuous soldier in Erasmus of Rotterdam’s 1504 Handbook of the Christian Soldier. Other diverse opinions for the identity of the Knight over the centuries are: an allegory of human strength and courage, a servant of Dürer’s patron, St. George, Luther, Pope Julius II, Savonarola, and strangely, a robber baron in league with death and the devil against the peasants. During the Nazi period the identity of the Rider was even ascribed to Adolf Hitler when the city of Nuremberg presented him with an original copy of “Knight, Death, and the Devil.”

Who is the Rider? Dürer’s title for his engraving was simply, “Der Reuter” which means “The Rider.” Perhaps this is an indication that for Dürer, the Knight, rather than the surrounding elements of evil, was the focus. A short excursus into the artist’s great suffering during 1513-1514 may shed some light. Dürer’s work on the engraving corresponds to the exact time period that his beloved mother, Barbara, suddenly became deathly ill, lingering an entire year. She was lovingly cared for in his household. At the time of her death, Albrecht journals of his mother, “Her most frequent habit was to go much to the church. She always upbraided me well if I did not do right, and she was ever in great anxiety about my sins and those of my brother. And if I went out or in, her saying was always, ‘Go in the name of Christ.’ She constantly gave us holy admonitions with deep earnestness and she always had great thought for our soul’s health. I cannot enough praise her good works and the compassion she showed to all, as well as her high character.” [1] Surely witnessing his mother’s faith and piety had a profound influence on Dürer’s work especially during her extended suffering as she journeyed Heavenward.

Who is the Rider? Dürer employed a method of signing his artwork that gives the viewer a vignette commentary on his interpretation. Not only does his distinctive AD monogram say something about the artist due to its location, but it gives Dürer himself an ongoing visual presence in his work. In “Knight, Death and the Devil”, the lower left corner is of utmost significance in understanding the scene. In Renaissance iconography the skull represents Adam and mankind’s sin. It rests on a stump picturing the

prophecy of the Second Adam: “There shall come forth a shoot from the stump of Jesse.” (Is. 11:1) Leaning directly in front is Dürer’s signature placard with his monogram, date of 1513, and the letter “S”, thought to be the Latin abbreviation for “Salus” meaning safety and salvation. This corner trio sets the tone for the entire engraving. Victory is already a foregone conclusion. The horse and Rider magnificently fill the entire woodcut. All else pales and has no power. The decaying corpse of death threatening with the hourglass of time and the ridiculous devil monster brandishing his spear can do no harm. Living oak leaves, icon for the resurrected Christ, adorn the head and tail of the resolutely striding horse. Fully arrayed and protected with the armor of God, the Rider looks neither left nor right nor behind, but only ahead as he confidently and steadfastly journeys onward to the Holy City. “Therefore, take up the whole armor of God, that you may be able to withstand in the evil day, and having done all, to stand firm.” (Eph. 6:13) 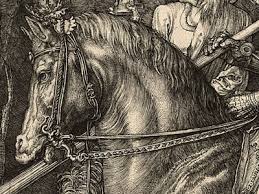