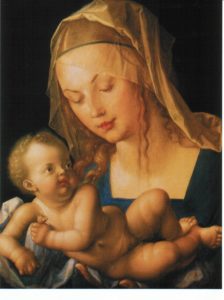 Not by human flesh and blood,

By the Spirit of our God,

Was the Word of God made flesh–

Dürer’s oil painting of Mary and the Christ Child is exquisite! Since the beginning centuries of the Christian Church artists have attempted to capture the doctrine of the Incarnation confessed in the Nicene Creed: “And in one Lord Jesus Christ, the only begotten Son of God…who for us men and for our salvation came down from Heaven and was incarnate by the Holy Spirit of the Virgin Mary and was made Man.” According to legend, the Evangelist Luke was said to have painted the first portrait of Mary and baby Jesus. However, the first documented image is a fresco dating from 170 AD. It can still be seen in the Catacombs of Priscilla near Rome. As time went on the popular image became known as the Madonna (Italian for “My Lady”) and Child. It was painted and sculpted in a myriad of interpretations for churches, monasteries, and also in smaller versions for personal devotional use. Often these images either served to promote or combat heresies in the Church. In the Byzantine era, icons depicted the Baby as a small man, thereby reinforcing the divinity of Christ. Later, in the Middle Ages, as the cult of Mary developed, the Madonna was pictured with a halo and reigning as a queen on a throne. At first glance, Dürer’s Virgin and Child With Half a Pear may simply look like a lovely Renaissance mother holding her baby, but so much more is being visualized as the artist gives flesh, blood, and bone to the Son of God.

Although the painting is small, only 14×19 inches, it embodies the greatest miracle of all times: “Behold, a virgin shall conceive and bear a Son, and shall call His Name Immanuel.” (Isaiah 7:14)

Behold: Look! There are no garlands of roses, no distant Alps, no chubby cherubs, not even Dürer’s well-known AD monogram. Only the Virgin and the Incarnate God! The dark background allows for no distractions. All eyes center on Christ, the fulfillment of the entire Old Testament. This is the Savior that all mankind has been waiting for since the catastrophic separation of God and man in the Garden of Eden.

A virgin shall conceive: Dürer paints Mary’s clothing in the traditional color of blue symbolizing her virginity. The transparent veil emphasizes her purity. Her eyes are downcast in humble submission. “Mary said, ‘Behold, I am the servant of the Lord; let it be to me according to Your word.’” (Luke 1:38) Baby Jesus rests in a sky-blue cloth supported by His mother’s loving hands. She presents her Son and Savior to the viewer as a precious jewel, her demeanor a model for all Christians.

And bear a Son: Perfectly proportioned, the strong, robust, naked baby is seen in His true humanity. The Creator enters time, binding Himself forever to His creatures in the flesh and blood of an Infant, and thereby releasing creation from the bondage of sin with His Presence.

And shall call His Name Immanuel: The artist pictures an active Christ Child rather than a passive sleeping Babe. His warm brown eyes gaze outward with confident resolution toward His earthly mission. He clutches a pear in His little hand as if it were a trophy of victory. In contrast to the apple as a familiar image for sin, in Renaissance iconography the pear symbolizes God’s love for mankind in the Incarnation.[i] Dürer pictures Jesus not only holding, but also having eaten the fruit evidenced by two tiny teeth marks. Thus the Child born in Bethlehem, the Mighty God, binds Himself to His creatures. Immanuel! God with us!

For You are the Father’s Son

Who in flesh the vict’try won.

By Your mighty pow’r make whole

All our ills of flesh and soul.

Additional Information: Virgin and Child With Half a Pear 1512, is oil on lime wood and housed in Kunsthistorisches Museum Vienna.