by Mr. Jonathan A. Swett

In 1523 Martin Luther wrote his first hymn for congregational use, “Dear Christians, One and All, Rejoice” (LSB 556). It appears as the first hymn in the first published collection of Lutheran hymns, Etlich Cristlich lider of 1523/24—known as the “Achtliederbuch” because it contained eight hymns—four of which were written by Luther. The basic thought and theological implications of the hymn include justification by faith; the saving sacrifice and work of Jesus; and freedom in Christ. This is the appointed Hymn of the Day for Easter 5 (one-year lectionary) and Easter 6 (three-year lectionary).

The poetic meter of “Dear Christians, One and All, Rejoice” is iambic because it follows the alternating pattern of an unstressed syllable followed by a stressed syllable. The syllabic meter is 87 87 887 (the first phrase has eight syllables, the second has seven, and so forth). This unsquare or asymmetrical format is typical of German material in contrast to the usual balance found in English hymnody. The rhyme scheme Luther subscribes to is ABABCCD (the last syllable of each ‘A’ phrase rhymes, as do the ‘B’ phrases, etc.).

Hymn analysis becomes more complex when searching for poetic devices. In The Anatomy of Hymnody, Austin Lovelace describes: “There is more subtlety and craftsmanship in great hymns than meets the eye (or the ear). Poetic devices are sinew and muscle which surround the skeletal meter, but if the rippling muscles and effects are obvious and distracting, the cleverness of the poet kills the spiritual intent of the hymn. To say this is not to disparage or discourage the use of poetic devices, for great hymnody could not exist without them. There are countless types of metaphors, rhetorical devices, figures of speech, and forms of repetition which are to be found in abundance in the hymnal.”

Lovelace provides twenty-eight examples of different poetic devices in his book and admits his list is by no means exhaustive. Because Luther’s style is very direct and the hymn is not of modern times, I did not find an abundance of devices used; however, I will share some that I did observe:

-Climax—Ideas and syntax arranged in ascending order of intensity

-Oxymoron—Combining for special purposes words which seem to be contradictory

-Tautology—Repeating the same thing in other words

LSB 556 Example: “The Son obeyed His Father’s will, Was born of virgin mother; And God’s good pleasure to fulfill, He came to be my brother.” (Stanza 6; 1st through 4th phrase)

Other examples of poetic devices that you may be more familiar with are alliteration, metaphor, paradox, personification, rhetorical question, simile, etc. 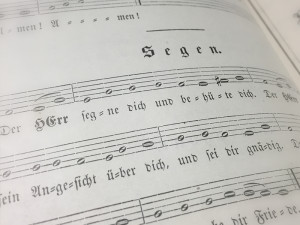 The tune which accompanies “Dear Christians, One and All, Rejoice” is Nun freut euch which is based on the 15th century folk song, “Sie gleicht wohl einem Rosenstock.” Analysis of the tune is more technical in nature and likely not as easily understood by the musically untrained. The melodic form is ABABCDE and is presented in a major tonality utilizing diatonic (contained in the major scale of the home key) notes with the exception of one raised fourth. The melodic intervals are primarily leaps and steps and the tessitura (range) is a ninth (one octave plus one note). Rhythmically, each phrase consists of an eighth note pick-up followed by straight quarter notes. Of course, there is one exception, when a dotted-quarter/eighth note replaces two of the quarter notes. The tune is easily notated in common meter (or 4/4 time) in which there are four beats in each measure and the quarter note receives one count. I classify the text/tune relationship as strong and effective for the particular narrative and expression of themes.

Provided below is a format I learned at Concordia University-Chicago and used to prepare this article—perhaps you may also find it useful for exploring other great hymns in the treasury of Lutheran hymnody!

Jonathan A. Swett is kantor of Our Savior Evangelical Lutheran Church and School, Hartland, Michigan.

Poetic devices and their location: