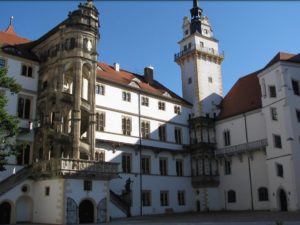 Located on the banks of the Elbe River, Hartenfels is not only an impressive Renaissance castle on the outside, but inside contains a jewel of the Reformation: the first newly constructed Lutheran church in the world! “If Wittenberg was the Reformation’s mother, Torgau was its wet-nurse. The reason why this comparison is made is that Torgau was the residence of the Saxon Electors, who actively supported Luther’s ideas.”[1] Elector John Frederick the Magnanimous played a key leadership role in both the political and theological aspects of the Reformation. In 1544, his clear confession of faith was set in stone when an existing wing in his stately Hartenfels residence was converted into the castle’s chapel, the first Lutheran church. Nicholaus Gromann was engaged as the builder/architect for the renovation, but it is clearly Luther, along with Cranach, who designed the elements of architecture and art to visually confess Word and Sacrament theology as the foundation for the Christian Church. 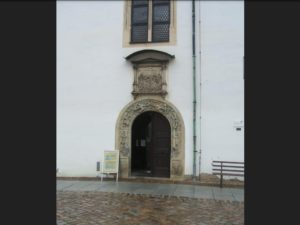 When standing in the courtyard the exterior of the chapel looks no different than the rest of the castle. However, there is one feature that distinguishes the portal as a sacred building. Surrounding the simple wooden gothic door, a carved stonework frame illustrates the sufferings of Christ. Above is a relief of the entombment. 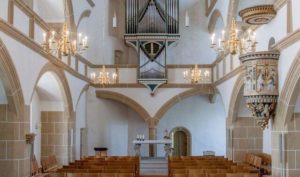 When entering the chapel, the visitor is stunned by the simplicity of the sacred space. It is not austere, but beautiful. The rectangular hall is relatively small but three stories high. It is crowned with a graceful gothic rib-vaulted ceiling. There are two balconies. The lowest surrounds on all sides, with the organ placed directly in front above the altar signifying the importance of music in the proclamation of the Gospel. On the opposite end, a door leads to the Elector’s residence. The upper balcony forms a three-sided horseshoe gallery. A small, stone, enclosed spiral stairway located at the left front of the chapel leads to the balconies. 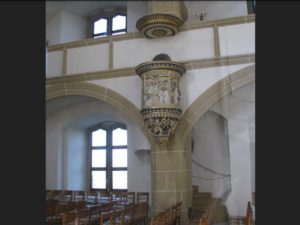 There are two eye catching features of the church that stand out. Both are gorgeous pieces of art. Both are visible liturgy. Both the pulpit and altar proclaim, in form and function, Word and Sacrament ministry. Amidst the starkness of the stone interior the pulpit hangs like a precious jewel on the side wall in the middle of the nave. Three Biblical scenes designed by Cranach adorn the pulpit. These elaborately carved and painted motifs, provide visual 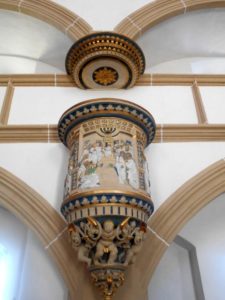 teaching of the Reformation and the importance of preaching. The middle panel, illustrates twelve-year-old Jesus  in the temple teaching and pointing to the Word of God. (Sola Scriptura/Scripture Alone) On the left panel, Jesus condemns sin and forgives the sins of the adulteress. (Sola Gratia/Grace Alone) The third panel portrays Jesus driving the money changers from the temple, teaching that justification comes through faith in Christ and not the performance of rituals. (Sola Fide/Faith Alone)[2] 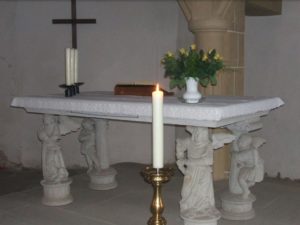 The altar is exquisite in its simplicity. Although it is merely a free-standing stone table, the four carved angels used as supports convey powerful imagery of heaven and earth uniting in the sacrament of the Lord’s Supper. Behind the altar a short fluted pillar serves as an altar piece drawing all eyes to the centrality of Christ and the forgiveness of sins in His holy body and blood.

Hartenfels Schlosskirche/Castle Chapel was dedicated by Martin Luther on Oct. 5, 1544 with these words: “My dear friends, we are now to bless and consecrate this new house to our Lord Jesus Christ…that nothing else may ever happen in it except that our dear Lord Himself may speak to us through his Holy Word and we respond to Him through prayer and praise.”[3]

For nearly 500 years the Hartenfels Castle Chapel has been a model and influence on Protestant church buildings and worship.

Special thanks to Rev. Armin Wenz for providing photography of the chapel.