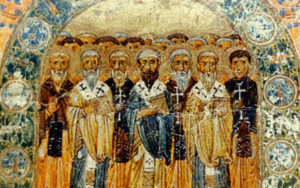 A common misconception is that the Lutheran Church was only started in the 1500s. An historian could look at it this way, at least from a strictly chronological view, but this is not how the Lutheran Reformers saw themselves. The Lutheran Reformation did not sweep away their predecessors into the dustbin of history. They were returning to the pure doctrine that the Church had taught from the time of Christ all the way up to their time. First, they went to Scripture itself, drawing their teaching from Jesus Christ and His apostles. Second, the Lutherans also found this true and saving doctrine in the writings of the Early Church fathers, those men who had studied Scripture and passed on the faith in the classic formulations of Christian theology. The Lutheran Church did not start in the 1500s, but is the continuation of the one catholic (universal) Church, including everyone who taught and believed the one catholic faith.

In The Book of Concord, the Early Church fathers are referenced and quoted in every confessional document (except the Small Catechism). Here are all the ones mentioned:

Justin Martyr, Irenaeus, and Tertullian from the second century

Gregory I, Bede, and John of Damascus from the sixth, seventh, and eighth centuries 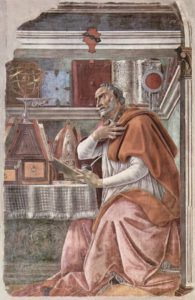 These men taught and wrote throughout the Roman Empire: from Judea to England; from northern Africa to Italy and Asia Minor. They are the leading teachers of the whole Church throughout the first eight centuries of Christian history, and the Lutherans claim them as their fathers in the faith.

One of the main reasons a child turns to his father is to find help and guidance. When the Lutherans quoted an Early Church father they were not merely staying connected to the past. They were in a fight over pure doctrine. So, as they drew their teaching from Scripture, they also turned to their fathers for help in the arguments with the Roman Church and with the radical protestants.

The Lutherans quoted the Early Church fathers against the new (false) teachers of the Roman Church, in order to show that the Lutherans are in line with the historic creeds and teachers. They are not changing anything, but purging the false ideas that had infiltrated the Church. For example, on the chief article of justification, Ambrose says, “Let no one boast about works, because no one is justified by his deeds. But he who is righteous has righteousness given to him because he was justified from the washing of Baptism. Faith, therefore, is that which frees through the blood of Christ” (Apology IV:103). They also approve of Augustine’s saying: “All God’s commandments are fulfilled when whatever is not done, is forgiven” (Apology V:51). The Lutherans also addressed the abuse of withholding the blood of Christ from the laity in the Lord’s Supper. Beyond Christ’s institution, they also found support from Justin Martyr, Cyprian, and Jerome. Another important argument concerned the authority of the pope and the Office of the Ministry. Contrary to papal claims of superiority, many of the ancient fathers sided with the Lutherans, including Jerome, who claimed that bishops are equal in the office (Smalcald Articles, Part II, IV:9). John Chrysostom, commenting on Matthew 16, says, “‘Upon this rock,’ not upon Peter. For He [Jesus] built His Church not upon man, but upon the faith of Peter. But what was his faith? ‘You are the Christ, the Son of the living God’” (Treatise 28). Furthermore, “most of the holy Church Fathers, such as Origen, Cyprian, Augustine, Hilary, and Bede, interpret the passage ‘on this rock’ in this way, as not referring to the person of Peter” (Treatise 26–27). The Lutherans also found support from the fathers on confession, good works, original sin, free will, monasticism, and honoring the saints.

On the other hand, the Lutherans also quoted the ancient fathers against the more radical wing of the Protestant Reformation (Anabaptists, Zwinglians, Calvinists, etc.). They were concerned to show that these radical reformers were going too far in rejecting what had come before them, even departing from the one true catholic faith. This was especially true concerning the Lord’s Supper and the Person of Christ. While many of the radical reformers reduced the Lord’s Supper to a memorial meal, the Lutherans found agreement with teachers like John Chrysostom: “Christ Himself prepared this table and blesses it. For no man makes the bread and wine set before us into Christ’s body and blood, only Christ Himself, who was crucified for us. The words are spoken by the mouth of the priest. But by God’s power and grace, by the word, where Christ says: ‘This is My body,’ the elements presented are consecrated in the Supper” (Formula, Solid Declaration VII:76). In both the Apology and the Formula of Concord, “testimony is produced from Cyril [of Alexandria] that Christ dwells also bodily in us in the Holy Supper by the communication of His flesh” (Formula, Solid Declaration VII:11; cf. Apology X:56).

Of course, the Early Church fathers were not infallible. Lutherans do not quote them as final authorities, nor do they subscribe to every writing produced by these ancient teachers. They were not afraid to point out where the fathers went wrong. For example, statements on free will from Chrysostom and Basil were rejected for “they are not in harmony with the form of sound doctrine” (Formula, Solid Declaration II:86). In the Large Catechism, Luther rebuked Jerome’s idea that repentance is the plank you use to swim when the ship of your Baptism is wrecked by sin. “The ship of Baptism never breaks,” says Luther, “it is God’s ordinance and not our work” (Large Catechism, Part 4:81–82). Sometimes the fathers need to be corrected. Yet, the Lutherans always approach them as respected fathers and attempt to put the best construction on their words and deeds. A good example is how they defend Anthony and early monastic leaders (Apology V:90). They sought to defend the good intentions of the fathers and not allow the mistakes to be used as arguments for false doctrine.

Quoting the Early Church fathers does not imply that Christian teaching is founded on the authority of men (Catalog of Testimonies, Conclusion). Lutherans hold the Scriptures to be “the only true standard or norm by which all teachers and doctrines are to be judged” (Formula, Solid Declaration, Summary, 3). But those teachers and doctrines that are judged true should also be appreciated and used. The Christian faith did not originate with us. The Christian faith is handed on from one generation of saints to the next, as each generation holds to Scripture. There is so much we can learn from the faithful teachers of the ancient Church, for we are all part of the same catholic Church. They should not be strangers to us. If we are truly Lutheran, then they are truly our fathers.