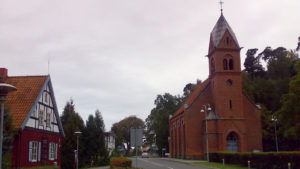 In Lithuania, when it comes to tracing political history, border lines, or even the establishment of a church founded by Lutheran “heretics”, nothing is ever simple to keep in order. The details are complex and confusing, sometimes heartbreaking, and often unbelievable. Nevertheless, Lithuania is a country that possesses incredible perseverance, and the Lutheran Church there, though small, is a witness to that and the work of the Lord sustaining what He has established despite overwhelming odds.

A unique aspect of the Reformation in Lithuania is that its biggest and longest lasting impact came through Lithuanians outside of Lithuania before it officially came to Lithuania on a much smaller scale.  At the time of the Reformation the Grand Duchy of Lithuania (also known as Lithuania Major) was the largest state in Europe spreading from the Baltic to the Black sea. In the 13th century, Teutonic Knights of the Holy Roman Empire conquered the region of the Baltic sea known as East Prussia (officially called the Teutonic Order at the time), the Grand Duchy’s western neighbor. There were numerous people groups living there including a large population of Lithuanians who composed a majority of the people in the rural eastern region that came to be referred to as Lithuania Minor. Reformation ideas spread quickly through this area and pressure was on the Grand Master of the Teutonic Knights, Albert Duke of Brandenberg-Ansbach, to get it under control. Instead of exercising military power to control it Albert chose a much more radical path and met with Martin Luther in Wittenberg where Luther encouraged him to convert the territory into a secular principality. In 1525 Albert, with the help of Luther and others, negotiated the conversion of the Teutonic Order to become the Duchy of Prussia with Albert as Duke. The Duchy of Prussia then became the first state to officially adopt Lutheranism as the state religion. For Lithuanians in Lithuania Minor and the predominately Catholic Grand Duchy this meant that several aspects of the Reformation influence and the current state of Lithuanian culture and heritage would come together in Lithuania Minor with many remarkable outcomes.

Before the Reformation Lithuanians possessed no written language and the majority were illiterate. Latin was the only language used by the educated elite and the church. Lutherans, however, promoted the religious education of all social classes and the printing of religious books, hymnals, Scriptures, and theological writings in the vernacular. They realized that teaching the truths of faith and the Scriptures for the spreading of the Gospel was linked to literacy in the native tongue, among other things. The first Lithuanian book to be printed was the Katekizmas translated by Martynas Mažvydas. Decades later, Jonas Bretkūnas and several others would complete the translation of the entire Bible into Lithuanian. Lithuania Minor would come to be known for their advancements in all areas of education, having better training for their clergy, and for being the center of ethnic Lithuanian culture–a fact that anti-protestant Catholics in the Grand Duchy could not avoid. 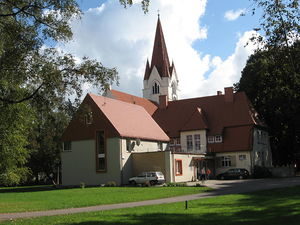 During this time the Lutheran Reformation had begun to spread to the Grand Duchy with the town of Kaunas accepting the Augsburg Confession in 1530. This led to somewhat of a tug-of-war between supporters of the Reformation and Catholics in the Grand Duchy. In the end, the Protestants (both Lutheran and Reformed) did not have enough support and authority to exercise their faith freely. The Reformation stirred Catholics in Lithuania to action. They developed Counter-Reformation and Catholic restoration movements, established new universities, printed new publications and severely limited the rights of all Protestants by confiscating property and passing legislation that restricted their abilities to grow. Despite all of this, a small remnant of Lutherans would stay and establish churches in the Grand Duchy in addition to those in Lithuania Minor.

Several centuries of continued political turmoil and persecution followed, greatly testing the will of the Lithuanian people. The borders of the Grand Duchy and Lithuania Minor would go through several partitions, annexations, and eventually the occupations of the 20th century. The Klaipeda region of Lithuania Minor was joined to Lithuania during the Soviet occupation bringing the Lutherans that lived there with it. Mass genocide, ethnic cleansing, religious persecution, and other atrocities carried out by the Nazi Germans and the Soviet Union devastated the Lithuanian people and the Lutheran church there leaving a profound effect on them seen still today. Many of their pastors perished or emigrated during this time and many churches were destroyed.

Even so, in 1991 when Lithuania became the first country to restore its independence from the Soviet Union, they were finally allowed to practice their faith publicly again and in their own language.  A remnant had remained and it has continued to grow since then. In 2000 the Evangelical Lutheran Church in Lithuania came into full fellowship with the LCMS and as of 2013 they have 20,000 members and 21 pastors who continue to faithfully proclaim the message of the Gospel and the Reformation. Even in the midst of seemingly insurmountable opposition, the Lord builds and sustains His Church through the saving message of Christ alone!