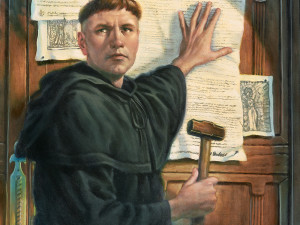 To understand the 95 Theses, we must first examine the nature of indulgences. According Roman Catholic theology, within the process of confession and absolution there is a distinction between “eternal punishment” and “temporal punishment” due to sin. All sin is worthy of damnation (i.e., eternal punishment). When a person comes to confess their sins, the priest questions them regarding whether or not they are genuinely repentant. If they are, then the priest is to absolve them. Through absolution he makes the sinner free of eternal punishment.

In order to fulfill temporal punishment due to sin, the priest assigns penance after he has absolved the believer of sin. The priest decides how much penance to assign on the basis of an educated guess regarding the level of contrition experienced by the sinner. The more contrition the sinner feels (as opposed to mere attrition), the less penance should be assigned. To the extent that the sinner does not complete all penance given to him, or the priest makes a mistake regarding how much penance should be assigned, the sinner will have to endure the sufferings of purgatory in the next life to fill in the deficit.

Indulgences were invented partially as a way to solve the problem of the inexact nature of penance. Because the pope has access to the “Treasury of Merits” (i.e., the great reserve of the merits of Christ and the saints), he can release persons from the need to perform penance whenever he so chooses. This power extends to this life as well as the next (i.e., purgatory). He can do this by attaching a promise of indulgence to any action a sinner might take. By the time of the Reformation, the pope had attached this promise of the abrogation of penance to the payment of a fee. The pope also decreed that people could  make a payment for their dead relatives in purgatory, thereby shortening their sufferings.

The specific occasion of the outbreak of the Indulgence Controversy was Johann Tetzel’s sale of indulgences in northern Germany. This sale was authorized by Archbishop Albrecht of Mainz and Pope Leo X. Albrecht had recently paid the pope to make him archbishop of the region.  In order to repay the loan Albrecht had taken out to cover the bribe, the pope offered him the option of allowing the sale of indulgences in his region of Germany and splitting the profits with the Vatican. Specifically, the papacy was interested in selling indulgences at this time as a way of paying for the construction of St. Peter’s Basilica in Rome. Although indulgences were not sold in Saxony, many people in Wittenberg traveled to the nearby regions and purchased them.

n the 95 Theses, Luther’s response to indulgences was several fold.  First, it must be understood that at this point Luther’s teaching on justification was not completely developed and so at first he did not reject the very idea of indulgences, as he later would.  Instead, Luther argued that the Latin Bible (also called the Vulgate translation) had improperly translated Matthew 3:2: “Repent, for the kingdom of heaven is at hand” as “Do penance, for the kingdom of heaven is at hand.” According to Luther’s interpretation, Jesus did not mean that people were obliged to perform penance. Instead, what Christ taught was that possessing an attitude of genuine contrition was central to the Christian life. The Church could prescribe the outward means through which one could express that inner contrition (i.e., penance), and even abrogate the necessity of employing those means (i.e., indulgences). Nevertheless, the Church could not circumvent the command of Christ by telling believers that by merely paying a fee that they need not feel genuine contrition for their sins.

Although Luther’s criticisms of indulgences in the 95 Theses stand at variance with his later Reformation theology, the document remains an important witness to a stage in the Reformer’s thinking.  The posting of the 95 Theses gave rise to a series of debates which caused Luther to radically rethink the doctrine of confession and absolution.  As a result of these debates, Luther eventually came to recognize the free grace of God in the unconditional promise of the Gospel.