It might be hard to understand how an argument over indulgences in 1517 could have led to Luther’s excommunication from the papal church in 1521. But between these years, the arguments over repentance, grace, and faith required that Luther challenge the authorities that his opponents were using to fight against the gospel, the pope’s decretals and canon law. Luther saw that, in order to defend the truth of God’s mercy, he had no other choice but to challenge the lesser authorities that brazenly withstood the greater authority of Scripture, God’s own Word.

Luther’s use of Scripture to challenge the pope came to a climax in the early summer of 1519 when Luther and the renowned theologian John Eck met face to face in Leipzig to debate the main topics of contention raised by the Wittenberg theologians. The debate wouldn’t have been such a big deal. In fact, after the debate, Eck admitted that he was willing to concede to Luther on 12 of the 13 theses. But the fact that the pope and his authority was challenged raised the stakes. Men had been branded heretics and executed for less.

Challenging the Pope’s authority was all but forbidden. The memories of Jon Huss’ fate determined at the Council of Constance a hundred years earlier hung like a shadow over the slightest hint of rebellion in the western church. But Luther’s conscience was pricked. He was convinced, by God the Holy Spirit himself through the Bible, that the decrees and canon law were in error. To let the Scripture have free course, therefore, the doctrines of the popes had to stand aside.

And so, in preparing for the debate, Luther added a 13th thesis to the original 12. It read,

“13. The very callous decrees of the Roman pontiffs which have appeared in the last four hundred years prove that the Roman church is superior to all others. Against them stand the history of eleven hundred years, the test of divine Scripture, and the decree of the Council of Nicaea, the most sacred of all councils.”[i]

Luther didn’t make these assertions carelessly. In a letter to his friend Spalatin he wrote, 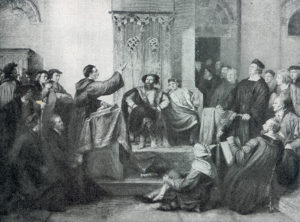 “For my debate I am examining the decretals of the Popes, and let me tell you below my breath that I am undecided whether the Pope is Antichrist or his apostle, because in these decretals – I am telling the truth! – he has miserably perverted and crucified Christ. I am exceedingly grieved to see the people of Christ fooled under pretense of the laws and name of Christ. Someday I shall send you my annotations to these decretals, in order that you may see what it means to make laws without regard to the Scriptures, in the endeavor to usurp the autocracy; not to mention other evidences quite similar to those ascribed to Antichrist, which are perpetrated by the Roman Curia, and rush forth from there. From day to day the Scriptures are becoming of more aid and assistance to me.”[ii]

Realize that Luther didn’t care about attacking the pope or any other ecclesial authority capriciously. His concern was for God’s Word and the doctrine. Even the pope himself could be tolerated if he but submitted to the Scriptures. Brecht writes, “Papal authority as such was not a problem for Luther; for him, it was only an indifferent and temporal matter. What was intolerable for him, however, was basing it upon passages of Scripture interpreted incorrectly.”[iii]

Once the accusation against the pope was in the open, Luther had no other choice but to face the consequences, the first of which was a theological showdown with Eck.

Apparently, going to a theological debate in the 16th century would have been like going to a championship fight night, except it was more pious, confusing, and fraught with bodily harm.

Let me try to give some context and set the scene. What started out as a friendly argument about indulgences between friends quickly descended into name-calling chaos, all because Karlstadt, one of Luther’s colleagues at Wittenberg, thought he had to defend Luther’s reputation by making the quiet dispute between Luther and Eck public. So there were months pre-debate theses, and counter theses. There were arguments over venues, judges, and opponents. Though Karlstadt presumed to debate Eck himself, it quickly became clear that Eck wouldn’t settle for anyone but Luther himself, that is, if Duke George of Saxony would even allow Luther to participate.

It never looked good for the Wittenberg Party. The city was firmly in the hands of the pope’s sympathizers. The inept theological faculty at the University of Leipzig were going to rile up the crowds in support of Eck and against Luther no matter what. When the Wittenberg party finally arrived in the city, the students escorting Luther and Karlstadt wore swords at their sides, not that that could have prevented Karlstadt from being dumped in the street and injured when his cart flipped over. In fact, the students proved to be nothing but trouble with all the fighting and tumult they started with the locals. The theological faculty in Leipzig weren’t exactly excited about the chance to host such an event. They tried to block it by posting placards around the city until the Duke George threw the culprits in jail.

Despite the chaos, when the day of July 4th, 1519 finally arrived, Luther and Eck finally settled into the heart of the matter. Eck described the impossibility of the Church militant upon the earth to lack a head, a leader to guide them all. He argued from various extrascriptural authorities to foment fears of ecclesial chaos if the pope lost even a smidgen of his authority. Luther wasn’t deterred. He quoted and expounded the Scriptures. He argued that the true head of the church on earth is Christ himself. He needs no worldly intermediary. He governs his church by his Word. Where Christ rules, then all other authorities contrived by human right had to yield.[iv]

No matter how accurately Luther argued from the Scriptures, Eck seemed to have the crowd in his hand. The citizens and students at Leipzig never wavered in their support. When the proceedings of the debate were submitted to the two sets of judges, the theologians of Paris decided in Eck’s favor and Erfurt was silent. Luther, dejected by a seeming defeat, returned to Wittenberg knowing that things could only get worse for him. Not only had Eck pressed him on his denial of papal authority, he exposed that Luther also had to reject conciliar authority as equal with the Scriptures. The excommunication was all but certain.

This would be defeat from a human or worldly perspective. But from the perspective of God and his angels, the first major battle of the Reformation had been a resounding victory. The Scriptures had come to the fore, and they would not be silenced by Eck, the pope, or any other man. As long as the Lord rose up preachers like Luther to hold forth the true doctrine, the church militant could be nothing other than the church that’s ruled by grace.

Men don’t govern the church. Jesus does. The Lord isn’t walled off in heaven. He’s with us through the means of preaching, baptism, and his sacrament. When we let Jesus speak, there’s no tyranny of consciences under the Law, but freedom and peace. The Lord grant that he continues to rule among us by his Word and sacrament without opposition from the vain doctrines of men.