The author of Hebrews writes, “By faith Noah, being warned by God concerning events as yet unseen, in reverent fear constructed an ark for the saving of his household. By this He condemned the world and became an heir of righteousness that comes by faith” (Hebrews 11:7). Noah was given an incredible task. As God’s preacher to the world, even though he became the object of ridicule and persecution, Noah held fast to the Word and promise of God.

The church proclaims a similar message today. Because we believe that this world will end and our Lord Jesus Christ “will come again to judge the living and the dead,” the world scoffs at and is hostile to what we preach. As we hold fast to the Word of God, let us consider how “we are surrounded by a great cloud of witnesses (Heb. 12:1),” especially Noah, our father in the faith.

1. Luther comments on the godlessness Noah confronted in the world: “All men were ungodly, lived in idolatry and false worship, hated the true worship of God together with the promises of the Seed [Messiah], and persecuted Noah for proclaiming forgiveness through the Seed and for threatening with eternal doom anyone who did not believe that there was forgiveness…We have seen wickedness on these few and evil days of ours. Just as at the time of Noah, godless men adorn their misdeeds with the name of holiness and righteousness.”[1]  What are some of the godless misdeeds in our day that the world calls righteous and holy? As we are given opportunity, what are we to proclaim to the world?

2. “It was not easy to believe that the entire human race would perish. The world regarded Noah as exceedingly stupid for believing such things; it derided him and without a doubt also made his structure (the ark) the object of ridicule. In order to encourage him in trying circumstances, God speaks with him several times and reminds him of the covenant…that [Noah] firmly believe that Christ will be born from his descendants and that God, in His great wrath will let a seedbed of the church remain…[That little church] will be saved not only from the violence of the water but also from eternal death and damnation.”[2]  The world ridicules many things that we Christians hold dear. Where is our comfort and consolation to be found?

3. Luther comments on the obedience of faith saying, “Noah is praised as an example for us because he [had a living faith and was] obedient to God’s command; and because he believes God both when He gives a promise and when He utters a threat, he painstakingly carries out God’s direction in regard to the ark, the gathering of the animals, and the food…If, then, we consider Him who gives the command, it will readily become clear that even though God’s commands appear ordinary and trivial, they are nevertheless of the highest order and cannot be carried out or fulfilled by any human being except without divine help.” [3] What are some of the seemingly “ordinary” and “trivial” commands of God that we are to carry out in our daily lives as Christians? How can we know that these works are godly and right?

4. God told Noah, “Go into the ark, you and all your household” (Gen. 7:1). Luther notes, “There was that unbelievable wrath; and the human mind could not comprehend that by the Flood God would destroy the entire human race, all but eight souls. Therefore Noah, a holy, righteous, gentle, and compassionate man, had many a conflict with his heart; and only with the greatest disquiet did he hear the voice of the Lord as He threatened all flesh with sure destruction. For this reason it was necessary to comfort him with an eloquent word and to strengthen the faith of the distressed and troubled man, lest he doubt.”[4] What comforting and eloquent Word does God speak to you in the midst of your fear and doubt?

5. The ark contained a little church of eight souls. “This is adequate evidence that size does not make the church. Nor dare one consider how holy its origin is, who its ancestors are, and what they have in their possession and have received from God. The Word alone must be considered, and the verdict must be reached on the basis of it. Those who truly embrace it are the ones who, like Mt. Zion, will never be moved (Ps. 78:68-69), even though they are very few in number and are utterly despised before the world…He who gives up the Word and hastens to put his reliance on [something else] ceases to be the church and becomes completely blinded.” [5] Why is it so important for us to hold fast to the Word of Scripture as our only rule and norm for faith and life in the Church?

6. Luther describes the life of faith as one in which we are “utterly dependent upon heaven.” Consider Noah: “Because the earth was covered with water and they had no ground on which to set foot, there was only the Word and promise to give them support as they drifted over the vast mass of water…Noah was surrounded by water on all sides and was all but overwhelmed by it. It is not works that preserve him, but solely his reliance upon the mercy of God, to which the Word of the promise kept calling him…Their hearts were in great need of this comfort after they had been terrified by the greatness of God’s wrath, which they had observed in its rage. Because it was impossible for their faith not to be shaken by the contemplation of such great wrath, God is, as it were constrained to shape His acts and words in such a way that their hearts look for nothing but grace and mercy. It is for this reason that he now converses with them, is present at their sacrifices, indicates that He is delighted by them…and promises that He will never again do anything of this kind.””[6] In the midst of troubles and things we cannot understand, where are to look in order to find God’s grace and mercy? 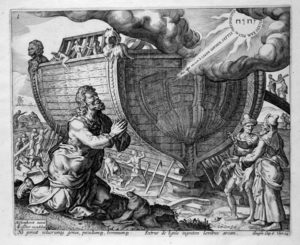 In his second epistle, St. Peter calls Noah a “herald of righteousness” (2 Pet. 2:5). May the Lord grant us the faith to believe and herald God’s righteousness to a world that is passing away (1 Cor. 7:31). Ultimately, we look forward to the life of the world to come, when “Our life will be to know God, to delight in the wisdom of God, and to enjoy the presence of God. We attain this life through faith in Christ.” And so we pray with Luther, “May the eternal Father, through the merit of His Son and our Deliverer, Jesus Christ, mercifully preserve us in it through the guidance and direction of the Holy Spirit. Amen. Amen.”