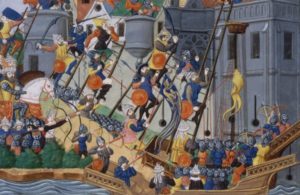 In the 1500s, the threat of Islamic armies was very real for the people of central and western Europe. Already, Christians in the Middle East and Greece lived under Turkish Muslim rule. Many of them had been enslaved or demoted to second class citizens. Others were driven from their homes, while still others were killed. The people of Germany were understandably fearful that the same fate could fall upon them if the Turks succeeded in defeating the Holy Roman Empire. What could Christians do in these uncertain times? Martin Luther’s treatise, On War Against the Turk (Luther’s Works, Vol. 46), not only advised the emperor, but also instructed the Christian. In fact, Luther says, “there ought to be only two [who fight]: the one is named Christian, the other, Emperor Charles” (p.170). In Part 1 we heard about the duties of civil government in waging war. Now we will hear how a Christian should fight, not with sword or spear, but with the Word of God and prayer. We must keep in mind that Luther is speaking here of the Christian apart from any worldly, external office. Christians may indeed serve in the offices of soldier or ruler, but then they would find their duties in the civil realm. Luther is concerned here with how the Christian should engage in spiritual warfare against Islam and other false belief.

First, we must understand that Luther saw the Turkish Muslim attacks as manifestations of God’s wrath against an ungodly “Christian” Europe. This was an unpopular view in his time, as it is still today, but Luther knew from Scripture that God did indeed chasten His people through the might of enemy nations and that suffering in this life should serve as a reminder of God’s anger over sin. So, Luther argues, even before Emperor Charles can do anything

with his army, “Christian should be there first, with his army. Since the Turk is the rod of the wrath of the Lord our God and the servant of the raging devil, the first thing to be done is to smite the devil, his lord, and take the rod out of God’s hand, so that the Turk may be found only, in his own strength, all by himself, without the devil’s help and without God’s hand. This should be done by Sir Christian, that is, by the pious, holy, precious body of Christians. They are the people who have the arms for this war and they know how to use them” (p.170). This kind of warfare is not waged by the hand, but by the heart and mind with fear, love, and trust in God.

The first step in this spiritual fight is repentance. If the sword of Muhammed is the wrath of God, then the sinner must turn back to God and flee to Christ who satisfied God’s wrath by His blood. Furthermore, the Christian should try to amend his life in accordance with God’s will. True repentance and faith clings to the promises of God’s mercy in spite of suffering. With the certainty of faith, suffering can be received as a chastisement of the loving Father, and the Christian knows that God is not against Him, but his Lord Jesus Christ has joined his cause and the Holy Spirit will strengthen and aid him throughout the days of trial. 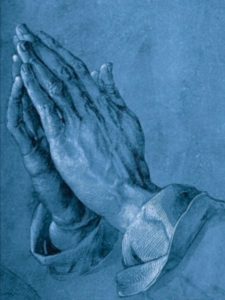 Along with God’s Word, the Christian’s chief weapon in this fight is prayer. Luther reminds his readers that “prayer pleases God, that he has commanded it and promised to hear it.” He continues, “It might, indeed, be of some use to have the people, especially the young people, sing the Litany at mass or vespers or in the church after the sermon, provided that everyone, even at home by himself, constantly raised to Christ at least a sigh of the heart for grace to lead a better life and for help against the Turk” (pp.172–3). Both at home in private and at church in public services of humiliation and prayer, Christians are to turn to God for help and protection.

When Luther wrote his treatise, he also preached a sermon on war with the Turkish Muslims. He spoke of those Christians who already lived under Islamic rule, as well as those Germans who were already captured during battle. He advises them to be dutiful servants to their overlords and to serve as witnesses to Christ by their lives of sacrificial love. He hopes that, by living this way, Christians may even convert their Muslim masters and neighbors to Christ. Sadly, Luther had heard that many Christians were apostatizing, falling away from faith in Christ and turning to the religion of Muhammed. So, he tells his hearers, “Be warned and admonished, that you remain in the right Christian faith and neither deny nor forget your dear Lord and Savior Jesus Christ, who died for your sin.”[1]

Luther goes on to urge his people to study and defend God’s Word: “Study now, while you still have room and place, the Ten Commandments, the Lord’s Prayer, the Creed, and learn them well, especially the [second] article… This

article makes us into God’s children and Christ’s brothers so that we become like him eternally and coheirs. Through this article, our faith is distinguished from all other beliefs on earth.”[2] What singles out Christians is faith in Jesus Christ, true God and true man, our crucified and risen Lord. Therefore, we must know the content of this faith and be prepared to confess it. We not only confess the Christian faith to God and with His Church, but we also confess it against the lies of the devil and for the sake of the world that needs to hear it. The Christian’s fight begins with repentance, faith, and prayer. Likewise, the fight continues, not with force of arms, but with words, studied, written, and spoken. 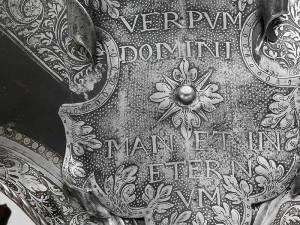 Later in life, Luther published other books on Islam, including a Latin translation of the Koran. He recognized the need for more people to know what Islam teaches and how to defend the Christian faith. If the time came when Christian Germany would be conquered by an Islamic empire, Luther wanted his people to be ready to give witness. Whether Christians today live in Muslim countries or in lands not ruled Islam, Luther’s advice still applies. We must be prepared for the spiritual fight of faith. In addition to honoring their temporal rulers, Christians are to repent, pray, be faithful to the Lord, study God’s Word, and be ready to defend it. To this end, may God our Father grant us His grace for the sake of Jesus Christ our Lord.