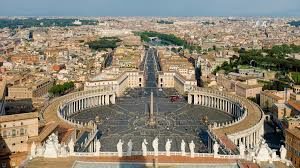 If you were watching the newsfeed on or around October 31st last year, you perhaps saw Pope Francis celebrating the Reformation with officials of world Lutheran Churches in Lund, Sweden. There the pope made a great effort to extend a hand of rapprochement toward our Church tradition. In fact, even beyond desiring ecumenical talks, there has been discussion among some Roman Catholics of pursuing a Lutheran “Ordinariate”—a group of pastors ordained Lutheran who would like to realize communion (or as we call it in the LCMS, altar and pulpit fellowship) with the Roman Catholic Church. As we look at all of this, what should we think? Does this mean that we can finally lay down our rhetorical arms and come to a peace with Rome? Does this mean that when the Council of Trent, the Roman response to the Reformation, said, “If any one saith, that justifying faith is nothing else but confidence in the divine mercy which remits sins for Christ’s sake; or, that this confidence alone is that whereby we are justified; let him be anathema,”[1] that we have gotten over that hurdle and now we agree?

However, we should also be honest. Sadly, Lutherans and Roman Catholics are still divided on the doctrine of justification, the “teaching upon which the Church stands and falls.” In other words, we still don’t agree on just how a person is made right before God and granted entrance into His Eternal Kingdom.

This is not to say that there have not been efforts to discuss this. The most notable one was probably the series of ecumenical conversations that resulted in what’s called “The Joint Declaration on the Doctrine of Justification.” In this document, noteworthy Lutheran theologians got together with noteworthy Roman Catholic theologians and determined just what could be agreed upon. In the end, there was a lot that was agreed. In fact, the theologians there determined that so much agreement was found that now they could retract those “doctrinal condemnations,” those “anathemas,” like we just read above. However, in the end neither the Roman Catholic Church officials agreed nor did many Lutherans, including the theological faculties from both of our LCMS seminaries.[2]

At this point you might be asking just what the disagreement is about. To put it succinctly, as Lutherans we say that we are saved by God’s grace, through faith alone. We believe that God saves someone by virtue of what Christ has done and what Christ has done alone, a salvation which is received by faith, not by any sort of works whatsoever. In other words, God takes what Jesus did for us and covers us with it, or “imputes” it to us by faith. Roman Catholics will agree with the statement, “we are saved by grace, through faith,” however, they will say that this grace comes not in the imputation of Christ’s work to us, but that God pours it into us and through it makes us inherently worthy of what Jesus has done for us. What’s the difference? The difference is that the Lutheran understanding says that your salvation is something that God does completely outside of you but that He covers you with, like the robes of white from in Revelation 7, or on your pastor on Sunday morning. The Roman understanding says that you are made anew in such a way that now you do things that are actually worthy of earning you eternal life. To be fair, the Roman Catholics confess that this is still by God’s grace: He pours that grace into you, but you still have to cooperate with Him in that grace and do worthy works. 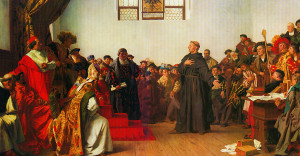 For some, this might seem like splitting hairs. But if you think about theological error like the course of a ship, a little variance in the direction of the ship can have immense effects on the final trajectory toward the destination. The earlier in the trip, the greater the effect. In theology, variances on the teaching of how we are saved are the earliest you can get in the journey.

From my personal perspective, I think the fruit of this error, the variance in the destination can be seen clearly in some of the writings that went into and came out of the Second Vatican Council. When you start to add our works into salvation in any form, the result is that even if you start by saying faith has to be there, eventually the focus will be on the works.

That is exactly what has come from Vatican II. This can be seen from the Catechism of the Catholic Church.  If you read what the Church is, and who is in it, it starts by saying this: “All men are called to this catholic unity of the People of God. . . . And to it, in different ways, belong or are ordered: the Catholic faithful, others who believe in Christ, and finally all mankind, called by God’s grace to salvation.”[3] It is subtle there, but hopefully you can see it. Who belongs to the people of God? The faithful in the Roman Catholic Church, then to a lesser extent, others who believe in Jesus, but again to a lesser extent all who are called by God’s grace to salvation. To be clear, the point here isn’t to point out differing levels of Church membership, instead it is to point out that this list includes some who don’t believe in Jesus at all. This view is made more explicit in the following paragraphs when the Catechism says that Jews have a link to the Church by virtue of their “response to God’s revelation in the Old Covenant.”[4] Likewise, Muslims are explicitly named, saying, “The plan of salvation also includes those who acknowledge the Creator, in the first place amongst whom are the Muslims; these profess to hold the faith of Abraham, and together with us they adore the one, merciful God, mankind’s judge on the last day.”[5] 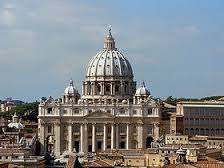 Finally, in the most explicit description of salvation by works apart from faith, the Roman Catholic Catechism states, “Those who, through no fault of their own, do not know the Gospel of Christ or his Church, but who nevertheless seek God with a sincere heart, and, moved by grace, try in their actions to do his will as they know it through the dictates of their conscience – those too may achieve eternal salvation.”[6]

As I say all of this, I hope that this doesn’t come across as nitpicky or self-righteous. It is not intended to be.  In fact, it’s heart-breaking. Also to be clear, Lutherans have never said that there will be no Roman Catholics in heaven. What we are saying is that as Lutherans, we are incredibly blessed with the pure teaching that we are saved because of what Jesus has done and not by our works whatsoever. As Paul says in the second chapter of his letter to the Galatians, “I do not nullify the grace of God, for if righteousness were through the law, then Christ died for no purpose.”[7] In other words, if we could earn our salvation, then Christ didn’t have to die. But thankfully, He has loved us so much that He did die. He saw our wretched state where we are unable to please God of our works at all, and He came and died for the sins which taint every one of those works, for again Paul says, “whatever does not proceed from faith is sin.”[8]

So, what does this mean for Lutherans and Roman Catholics as we celebrate the 500th anniversary of the Reformation? It means that sadly the differences between us and the Roman Catholic Church are still there. In fact, it would even appear that they may have in fact increased in some ways. In light of this, as I said before, we pray. Pray for the Church to be united. We also give thanks. Give thanks that the promise of God’s salvation in Christ is still being preached purely: that salvation that is not by works, but by faith. Give thanks for this, because without that promise of Christ’s blood shed for us, we would have no hope.