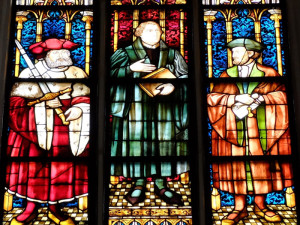 Martin Luther had much to say on the topic of Christian freedom in his tract from 1520. On the Freedom of the Christian was published in Wittenberg as the third of three writings that characterized the evangelical theology of the Reformation. The Roman Curia had issued the bull Exsurge Domine on June 15, 1520 in which Luther was threatened to be charged as a heretic and ordered to halt his preaching. This opened him up to the possibility of arrest and punishment. Luther responded with a fury of activity. To the Christian Nobility of the German Nation was published on August 18, 1520. The Babylonian Captivity of the Church was published on October 6, and On the Freedom of the Christian was put out early in November of 1520. This third tract was written to attempt to persuade Pope Leo X and Roman Catholics that the theology of the Reformation was not a novelty in the faith, but a pure confession of the Word of God and consistent with the truth of the Holy Scriptures. Out of this affliction and the Lord’s refining fire, Luther was given to write one of the most enduring treatments on Christian freedom ever in Christendom.

A Christian is an utterly free man, lord of all, subject to none.

A Christian is an utterly dutiful man, servant of all, subject to all.[1]

Among the ancients, Aristotle stated the obvious about lords and servants: “If there is a lord, then there is (also) a servant. And if there is a servant, then there is also a lord.”[2] Luther’s paradoxical teaching of Christian freedom, following Christ and St. Paul, joins lord and servant in one person. By faith alone, God sets a man utterly, completely, free in Christ. He is lord of all, subject to none. Love binds him as an utterly dutiful servant to the neighbor, subject to everyone. The paradox of Christian freedom then plays out in faith and love.

Luther sees all things in Christ, His person and work as He applies His saving effects to the Christian. Luther summarizes this tight connection of Christ and the Christian’s freedom in the introduction:

As utterly free as Christ was, He also bound Himself under the law to serve His creatures and win their salvation. Christ’s salvific example becomes the form of Christian freedom.

Luther considers freedom first as it relates to the inner man. The inner man becomes righteous, free, and a pious Christian in Christ. The Word does it all. As Luther emphasizes:

“One thing, and only one thing, is necessary for Christian life, righteousness, and freedom. That one thing is the most holy Word of God, the gospel of Christ, as Christ says in John 11[:25], ‘I am the resurrection and the life; he who believes in me, though he die, yet shall he live’; as John 8[:36], ‘So if the Son makes you free, you will be free indeed’; and Matt. 4[:4], ‘Man shall not live by bread alone, but by every word that proceeds from the mouth of God.'”[4]

Luther specifies which Word he means: “The Word is the gospel of God concerning his Son, who was made flesh, suffered, rose from the dead, and was glorified through the Spirit who sanctifies.”[5] What a comfort this Gospel brings with it! By faith alone the Christian receives all that Christ gives. “Faith alone is the saving and efficacious use of the Word of God, according to Rom. 10[:9]: ‘If you confess with your lips that Jesus is Lord and believe in your heart that God raised him from the dead, you will be saved.'”[6] A man is “justified by faith alone and not any works; for if it could be justified by anything else, it would not need the Word, and consequently it would not need faith.”[7]

Later in the tract, Dr. Luther considers the outer man. Are Christians content to be saved by faith alone, and not do any works? Is Luther’s liberty a liberty of ease? Luther answers the charge of his Roman Catholic opponents: “…not so, you wicked men, not so. That would be indeed proper if we were wholly inner and perfectly spiritual men. But such we shall be only at the last day, the day of the resurrection of the dead. As long as we live in the flesh we only begin to make some progress in that which shall be perfected in the future life.”[8]

Insofar as man is “a servant, he does all kinds of works.”[9] Man must learn self-control and have dealings with others in this life.

“Here the works begin: here a man cannot enjoy leisure; here he must indeed take care to discipline his body by fastings, watchings, labors, and other reasonable discipline and subject it to the Spirit so that it will obey and conform to the inner man and faith and not revolt against faith and hinder the inner man, as it is the nature of the body to do if not held in check. The inner man, who by faith is created in the image of God, is both joyful and happy because of Christ in whom are so many benefits are conferred on him; and therefore it is the occupation to serve God joyfully and without thought of gain, in love that is not constrained.”[10]

Luther’s tract on freedom has rightly been called: “the most perfect expression of Luther’s Reformation understanding of the mystery of Christ.”[11] As it goes with Christ, so it goes with the freedom of the Christian. The Freedom of the Christian is a confession of Christ in a nutshell. Christian freedom is a gift from Christ Himself, “For freedom Christ has set us free…” (Galatians 5:1). What Christ did to win salvation in His divine and human natures, He now gives to those who by baptism bear His name: Christian. God justifies the sinner by faith alone. The sinner is changed in inner and outer man after the likeness of Christ. The Christian is at once utterly free in faith and a servant to all in works of love. Christian life is lived between these twin poles of faith and love. This is the paradoxical Christian freedom as Luther taught the Church.