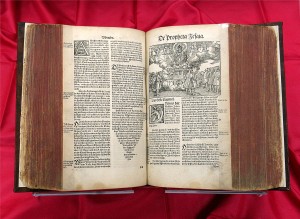 Central to the project of the Lutheran Reformation was the restoration of the supreme authority of Scripture within the life of the Church. Contrary to what is claimed by many contemporary Roman Catholic apologists, the supreme authority of the Bible was by no means an innovation of the Reformers. Going back to the early centuries of Christianity, numerous Church Fathers and even many medieval theologians (notably, Thomas Aquinas) witnessed to the ultimate authority of Scripture. In the late Middle Ages there were some significant developments in regard to the notion of authority within the Western Church. This was due to a series of complex conflicts that occurred between the pope, a number of dissident groups (such as  the Spiritual Franciscans, etc.), and the Holy Roman emperor.

These late medieval conflicts gradually led to the abandonment of the supreme authority of the Bible and its replacement with a belief in three sources of theological authority. For late medieval Christians (and contemporary Roman Catholics), all theological authority can be traced back to Christ’s authorization of the apostles as his infallible witnesses. This infallible apostolic witness was partially deposited in the Bible, thereby making it the authoritative Word of God. Nevertheless, they argued, the apostles choose not to write down some of their witness. What they had not written down in the form of the New Testament was deposited in the institutional Church as an oral tradition containing doctrines and practices not found in the Bible, but nevertheless apostolic and authoritative. Finally, since the bishops of the Church occupied the offices of the apostles, it was possible under special circumstances (such as an official Church council) for them to exercise the same authority as the apostles and actually teach infallibly. This was of course supremely true of the pope, who as the head of the Church exercised Christ’s own office of leadership and supreme teaching authority. 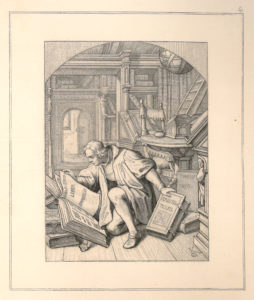 Although there was certainly a range of opinions about these matters in the early sixteenth century, this basic account of the authority is the one that Luther more or less encountered as a theology student. It is important to note that Luther’s faith in such a view of theological authority was only gradually eroded. Indeed, it would appear that the Reformer only finally rejected such a view of authority subsequent to his so-called Reformation breakthrough. Although historians cannot go back in time and read Luther’s thoughts at the different stages of his early Reformation development, many have suggested that his later affirmation of the doctrine of sola Scriptura was dependent on his discovery of the gospel.

For Luther, the central question that motivated his reforming activity was how a sinner could find peace with God. When he turned to the Bible for the answer to this question, he discovered St. Paul’s assertion that we receive justification through faith in the gospel (Rom. 3:28). As many of Luther’s early debates demonstrate (notably, the Leipzig debate with Eck in 1519), when the Reformer confronted his opponents with the truth of the gospel drawn from the Scriptures, their response was more often than not to appeal to either the unwritten tradition of the Church, or the infallibility of the Pope. From this, it appears that Luther concluded that both the institutional Church and the unwritten tradition were at odds with the gospel as it was directly and clearly taught in the Scriptures. If this was the case, then in light of the fact that Scripture was God’s own Word (something acknowledged by his opponents), those other authorities could not be of divine origins. Indeed, as Luther wryly noted in his defense at the Diet of Worms (1521), since Church councils and popes contradicted each other, how could his conscience be bound to anything other than the Bible?

Several misconceptions about Luther’s doctrine of sola Scriptura must be resisted. The first error is what some modern Lutheran theologians have called “Gospel-Reductionism.” Gospel-Reductionism is the belief that the Scriptures are only authoritative because they contain the gospel. Everything that is not the gospel, or directly connected to the gospel can be thrown out at will. Although Luther believed that the gospel was the center of the Bible, he did not believe that everything in the Bible could be reduced to the authority of the gospel. God’s law, as well as all the other articles of the faith (Trinity, creation, etc.), are present in the Bible and should be believed because Scripture is God’s Word.

This of course raises the question: Why did Luther consider the Bible to be God’s Word? In a number of passages Luther states that Christ himself affirmed the authority of the Old Testament and made the apostles infallible teachers of the truth. Scripture’s authority is therefore founded on the authority of Christ. The Holy Spirit, operative through the promise of Christ, caused the prophets and apostles to write the words that God wished. As a result, Luther often speaks of the very words of the Bible as being those of the Holy Spirit. This means that the Scriptures are true in all their details, even when human reason cannot see how the Scriptures could be true in certain instances. Nevertheless, much as in the case of the outward form of the sacraments, even when hidden, God and his truth are active in, under, and through the literal words of the Bible because of Christ’s promise.

The second misconception regarding Luther’s doctrine of sola Scriptura is misguided belief by many Christians that “Scripture alone” means that there can be no  other secondary authorities within the Church, such as creeds and confessions. By “sola Scriptura” Luther and the subsequent Lutheran tradition did not mean that Scripture was the only theological authority, but rather that it was the ultimate authority in the Church. Throughout its history, the Christian Church has encountered situations that the prophets and apostles did not face when they composed the Scriptures. Therefore to apply and clarify what the Bible teaches, it has been necessary for Christians to draw up creeds and confessions of faith. Lutheran Christians have historically believed that these authorities are valid insofar as they witness to what is taught in the Bible.

The Lutheran Church therefore does not view its creeds and confessions (found in the Book of Concord) to be an authority standing alongside the Bible (like the Book of Mormon in the Church of Latter-Day Saints), but rather standing under the authority of the Bible. If any of these secondary authorities teaches something not found in Scripture, then ordinary believers have the right to hold them accountable before the bar of the supreme authority of the Bible. It is the responsibility of Christians in each generation to test the official teachings of the visible Church against what they find in the Scriptures. 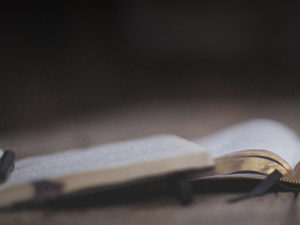 Overall, Luther’s view of the Bible’s authority is refreshing corrective to many of the pitfalls of contemporary Christianity. Notably, Luther believed that the Bible’s authority was centered on Christ and the gospel, but was not reducible to it. Likewise, in contrast to Roman Catholicism, Luther believed that the Bible was the supreme authority within the Church and could call those who taught falsely to account. Lastly, contrary to the belief of many in contemporary American Christianity, Luther held that there could be other secondary authorities within Church (such as creeds and confessions) as long as they were subordinate the supreme authority of the Bible.