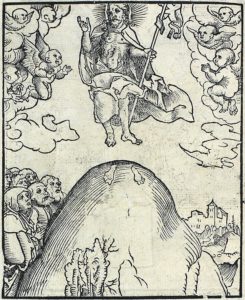 The Festival of the Ascension marks Jesus’ ascension into heaven forty days after Easter. The scriptural accounts[1] of the event are straightforward. Jesus, while blessing his disciples, is taken up and a cloud hides him from their sight. Two angels appear and tell the disciples that this Jesus will return in the same way.

While the account is straightforward, Jesus’ ascension raises some questions. What does it mean to ascend? Where is Jesus now? What benefits do we gain from Jesus’ ascension? Lutheran Reformers in their sermons point us to the scriptural answers to these questions. They emphasize Christ’s victory over sin and his continual presence with his church in the world.

A key fruit of this for us is that we are free from sin. Luther says that we can now taunt sin. If sin threatens to terrify us, we can say to sin: “You are my servant, I am your lord. Have you not heard the canticle ‘You have ascended’ [referring to Ephesians 4:8].”[5] This is one component of being free from sin, the freedom from fear before God. Another component is the freedom to turn away from sin. Luther preaches both components:

“If you believe in Christ, then the text says that you believe that he sits above, and that he has taken captive my captivity, that is, my sin. In what way? It should not terrify me before God…. I believe in him who is above, who has captured sin. Therefore I know no other sin than sin that is captive, that is now condemned before God and in the end will be beheaded. … You [sin] wish to lead me into despair and sadness, presumption, and idolatry. But you no longer have power. You have been taken captive. Your tyranny and dominion are ended. Nor should … I do evil things, be proud, hateful, or jealous, but I tread these underfoot and am patient, etc.”[6]

Free in Christ, we can mock sin and stand against its temptations because Christ has led sin into captivity by his ascension. 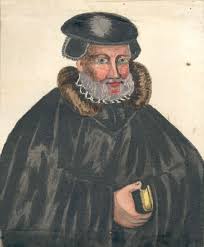 Johannes Brenz published a sermon on the ascension in the 1550s. Brenz was a Lutheran reformer who was widely-known and respected in the sixteenth century, publishing many works and attending events such as the Heidelberg Disputation, the Marburg Colloquy, the Diet of Augsburg, and the Council of Trent. He was the reformer of Schwäbisch-Hall and later served in Württemberg.

Brenz’s sermon expands on the structure of Luther’s sermon. Like Luther, Brenz discusses the history and the fruits of the ascension. Additionally, Brenz cites a wide array of scriptural passages beyond Acts 1 that speak to the ascension. Brenz then adds a section on what it means that Christ ascended into heaven.[7]

Brenz refutes arguments that Christ’s ascension and session at the right hand of God mean that Christ’s body is restricted to a single physical location in heaven. Because of that supposed restriction on the location of Christ’s body, the Sacramentarians argued that Christ’s body and blood could not be present in the sacrament of the altar. Brenz holds that Christ ascends into heaven that he might fill all things. This presence goes beyond human understanding, so that Christ is “outside of, within, above, and below all places, both in heaven and on earth.” While Christ is present everywhere, this presence is no longer visible. The ascension into heaven is the end of Christ’s time of living visibly with his disciples on earth. His presence with the church on earth now is invisible.[8]

Brenz expands on the fruits of Christ’s ascension. Like Luther, he proclaims that Christ has led our enemies captive, enemies such as misfortune, death, and hell. But then he adds that Christ has also led us to heaven. Brenz asks the obvious rhetorical question: how can this be? The disciples were left on the mountain when a cloud hid Jesus. We are still in this world. Brenz responds that the answer is found in Paul: Your life is hidden in Christ with God (Colossians 3:3). Christ, the head of the church, has ascended. We, the members of his body, have ascended with him. But our ascension with Christ is now hidden. Our reign in Christ above gives us hope in times of trouble. Those troubles have been led captive by Christ. We reign over them. There will come a time when Christ and our victory will be made visible for us.[9]

The Reformers have much comfort to offer in preaching the ascension. Luther and Brenz recount the history and show how Christ uses the ascension for our good by leading captivity captive. Brenz proclaims Christ’s ongoing presence with us and offers the rich comfort that we reign now in Christ over all troubles and calamities. We look forward to that day when our faith and our hope will be made sight.

[3] Modern English translations (such as the NRSV, NIV, and ESV) translate this rather freely, saying that you led “a host of captives in your train.”