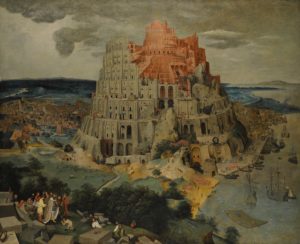 In the Large Catechism on the First Commandment Luther says, “There has never been a nation so wicked that it did not establish and maintain some sort of worship. All people have set up their own god, to whom they looked for blessings, help, and comfort.”[1]

This truth was evident even among the world’s earliest peoples. While Noah and his descendants filled the earth after the Flood, false gods and false worship abounded. False worship is characterized by man’s attempt to reach God by his own efforts, as the Tower of Babel illustrates. However, worship of the One True God, as practiced by Noah and Shem, relies solely on God’s mercy rather than any human works or merits.

1. True worship is grounded in the Word of God. “The church cannot exist without the constant use of the Word, and the church always had its sacraments, or tokens of grace, and its ceremonies. Thus Abel and Cain had been accustomed by their father to sacrifice, which at that time was the proper form for the worship of God; and they continued to offer sacrifices. In the same manner Shem had meetings, sermons, forms of worship, sacrifices, and other ceremonies, which continued in existence up to the time of Abraham. On these religious practices, which Shem was carrying out, this hunter [Nimrod] makes inroads…He sets up new forms of worship, and he oppresses those who stand before God from how it appears before men. What is good and righteous before God the world regards as evil and unrighteous.”[2] The Word and Sacraments may appear weak or worthless to the world, but why do we, the Church, hold them in such high esteem? 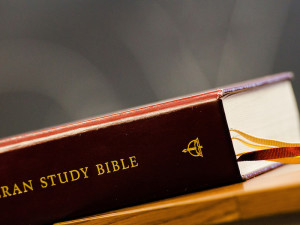 2. Luther describes the motivation behind the construction of the Tower of Babel: “[Their] sin was nothing else than extraordinary smugness and pride linked with contempt for God… ‘Let us build ourselves a city and tower,’ not for God, not for the church of God, but to suppress the church…[They] are surely not concerned that the name of God may be hallowed…They denote that this was to be a place of worship. The implication was that God was dwelling very close to this tower. This is Satan’s way. He adorns himself with the title of God and wants to have superstition regarded as religion…This, however, is their sin: they attach their own name to this structure; having despised Noah and the true church, they are intent on sovereignty; they maintain that they are the people who are very close to God, to whom God listens, and to whom He grants success; and they conclude that Noah, in turn, has been abandoned and cast aside by God.” [3] What kinds of false towers do we, the sinners of today’s world, construct to worship God or maintain that we are close to Him?

3. “[Genesis 11] is written for our comfort; for our faith is feeble, and even for one who is ever so patient the cross is heavy. Therefore when we see the plans of the ungodly and so many violent offenses, we get such thoughts as these: that the Church is about to go to ruin and that ungodliness is about to take over everything…Lest we suppose that Satan had been allowed to remove the sunlight of the Word utterly from the world and to suppress the church, the generation of the holy fathers (Noah and Shem) is set before us, to show us that by the mercy of God the remnants were preserved and the church was not completely wiped out…God has always preserved for Himself a people that would cling to the Word and would be the guardian of religion and of sound doctrine in the world, lest everything degenerate into ungodliness and there be no knowledge of God among men…God has never altogether abandoned His Church…where the Word is, there the Church is, there the Spirit is, there Christ is, and everything.” [4] How can we be certain that the Lord will preserve us and His Church?

4. God extends to us the same steadfast love and mercy He showed to our fathers in Genesis: “The church has always held [the Book of Genesis] in the highest esteem and with good reason; for if we did not have it, we would have no knowledge about the situation of the church for two thousand years. But now we, who follow the patriarchs after such a long interval, have cause to marvel at those holy rulers of the first church, Adam, Seth, Noah, and Shem; and we appraise their conflicts on the basis of our own trials, which the brevity of our life makes bearable. After standing in the battle line for many centuries, those men overcame the assaults of Satan and of the world through faith in the promise of the woman’s Seed (Christ); and finally, when they were called away from this station, they left their descendants well equipped and following in the footsteps of their ancestors. Therefore even though the church was never at peace, it nevertheless weathered the fiercest tempest of its trials…The godly saw the day of Christ from afar; and in that hope they overcame whatever hardships the thankless world and Satan, the malevolent enemy, put in their way.” [5] How do the trials of the saints give us hope in our afflictions?

Luther urges us to “Be patient, and let us learn to endure the rage and the blows of Satan as he tries to tear the Church of Christ to pieces and establish his own church. We are no better than the fathers. Even with much sweat and effort they barely succeeded in preserving the Word and in snatching it from the jaws of Satan.” [6] We who have been baptized into Christ worship Him, hear His Word, and live according to His promise of forgiveness, life, and salvation. “We are to trust in God alone, to look to Him alone, and to expect Him to give us only good things.”[7]

True worship relies not on our building towers to God, our works, or merit. True worship relies on God alone, His Word and mercy given to us poor sinners. Therefore, we do well to follow our Reformation fathers, who confessed faith in Christ to be “the foremost act of worship as in Psalm 50: ‘Call upon me in the day of trouble; I will deliver you.’ This is how God wants to become known and worshiped, namely, that we receive blessings from him, and indeed, that we receive them on account of his mercy and not on account of our merits. This is the richest consolation in afflictions.”[8]