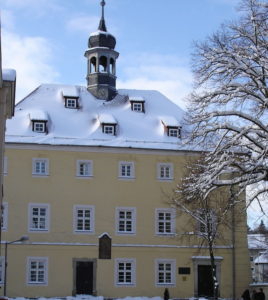 The contributions of Nicolaus Decius to Lutheran hymnody, although few, actually predate the first published hymns of Martin Luther by one year.  The settings he prepared of the Gloria in Excelsis, Sanctus, and Agnus Dei are evidence that he shared in the same interest as Luther of allowing more of the liturgy to be sung by the entire congregation rather than by the choir alone.  Two of these settings have survived in Lutheran hymnals of recent decades, “All Glory Be to God on High” and “Lamb of God, Pure and Holy.”

Decius was born about 1485 in the town of Hof in Upper Franconia, Bavaria. After receiving degrees from the University of Leipzig, he entered a cloister and became a teacher at Braunschweig before becoming prior of the Benedictine nunnery at Steterburg near Wolfenbüttel. In 1522, due to his attraction to Luther’s teachings, Decius served briefly as rector of the lyceum in Hanover before returning to Braunschweig during which time the city became part of the Reformation and he became a master in the St. Katherine and Egidien School. During the next six years, Decius studied Reformation theology at Wittenburg University, completed a Master of Arts degree, was recommended by Luther as assistant pastor at St. Nicholas Church in Stettin, and was married. In 1532 he was assistant pastor in the East Prussian town of Liebstadt, leaving two years later for Mühlhausen near Elbing. Decius, himself a capable musician (harp) was appointed as cantor in Bartenstein and also teacher in the village Latin school until he became senior pastor and assistant cantor in Königsberg in 1540. Decius returned to Mühlhausen in 1543 and nothing further is known of him after preparing a successor to perform his duties in April of 1546. 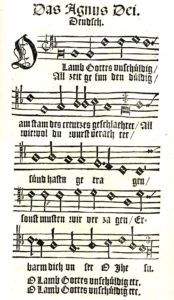 Decius’ three liturgical substitutes were published in his Summula (1523) along with selections from the Gospel of Matthew, Latin authors, and Low German poetry. “All Glory Be to God on High” first appeared for liturgical service use in Gesang Buch (Rostock, 1525) in Low German. A High German version appeared in Valentin Schumann’s Geistliche lieder auffs new gebessert und gemehrt (Wittenburg, 1539) in which the tune Allein Gott in der Höh—Decius’ adaptation of a tenth-century plainsong tune to a “Gloria in excelsis” used at Easter time—first appeared. J.S. Bach used this familiar melody in four of his cantatas, Choralgesänge (choral songs), and in ten different movements for organ. The lilting feel of its triple meter has caused it to be referred to by some as “the Lutheran waltz.”

The text of “Lamb of God, Pure and Holy” appeared with “All Glory Be to God on High” in the publications listed previously. It first appeared with the tune that is currently associated with it, O Lamm Gottes, unschuldig, in Anton Corvinus’ Christliche Kirchen-Ordnung (Erfurt, 1542). It was adapted by Decius from a thirteenth-century, or possibly earlier, “Agnus Dei” plainsong for the feast of the Blessed Virgin. This meaningful hymn is frequently used during midweek Lenten services and on Good Friday. In the Chief Service for Good Friday in Lutheran Service Book, each successive stanza is sung following each reproach of Jesus from the cross and response of the people. J.S. Bach used this solemn melody in his St. Matthew Passion, Choralgesänge, as well as setting for organ in the Orgelbüchlein (little organ book) and The Great Eighteen Chorales.

Decius was blessed by God with skills and abilities to serve in multiple capacities: teacher, leader, pastor, and musician. Let us celebrate the contributions of Nicolaus Decius to our Lutheran heritage as we proclaim the innocent death and perfect resurrection of Christ, the pure and holy Lamb of God!