Lucas Cranach the Elder occupies a unique and pivotal position in history as the artist who gave visual expression to the Reformation. Born in 1472, with the name of Lucas Mahler (“Painter”) he later became known as Cranach referring to Kronach the city of his birth in Northern Franconia. In 1505, while studying in Vienna, he was chosen as the court painter by Frederick the Wise of Saxony. Moving to Wittenberg placed Cranach on the cusp of dramatic changes to the church and society that are still felt today. Not only did he have a prestigious position at court, many patrons, a large prodigious art workshop, a printing press, an electoral monopoly on the town’s pharmacies, a seat on the town council, several times the mayor, and was one of the  wealthiest landowners in the town, but most importantly, he was a close personal friend of Martin Luther. So intimate was the relationship between the two that Cranach and his wife, Barbara, were witnesses at the Luthers’ wedding in 1525, and the two men were godfathers for each other’s children. Not only was Cranach supportive of Luther’s confession of Scripture, but his artwork propelled and fostered the rapid spreading of the Reformation throughout Europe.

You have heard it said that a picture is worth a thousand words. This was especially true in the early sixteenth century as the vast majority of people were illiterate. Cranach’s various artistic works are sermons in paint and could rightly be called Lutheran art. They teach the truths of Holy Scripture proclaimed by the Reformation for all to see, learn, and take to heart.  It would appear that Lucas Cranach was the first artist to illustrate the text of Jesus blessing the little children recorded in Matt. 19: 13-16; Mark 10:13-16; and Luke 18:15-17. Beginning in 1538, the Cranach workshop produced many copies of this Biblical account for many years. Over 20 variations are extant. 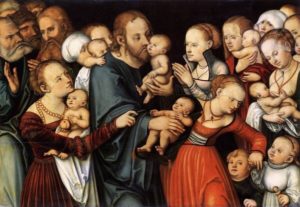 Although Cranach was not an ordained pastor, he was most certainly a theologian, using his skills with paint and brush to visually proclaim the mercy of Christ. In Let the Little Children Come to Me, the total focal point is Jesus. He is large, filling the center of the crowded painting. Eager mothers, with gestures of devotion and smiles of reverent joy, bring their babies and children for a blessing. The scene is tender. Jesus gently nuzzles, kisses, and embraces one infant while at the same time lays a hand of blessing on another. All is sweet with the exception of two things. On the far right, the face of a sad woman is pictured with troubled eyes looking away from Jesus. Maybe she is barren and has no baby to bring. Clustered in the upper left corner, the rebuking disciples also have eyes averted from their Savior.

Cranach’s painting is a masterpiece in teaching the truth and details of this Biblical account. But is there more going on here than first meets the eye? The style of Renaissance clothing suggests that the painting also reflects the artist’s own time period of the Reformation. Perhaps this was a visual statement against the heresy of the Anabaptists who believed that infants did not sin and therefore were not in need of Baptism, which, according to them, renders the Baptism of infants invalid. Cranach refutes this false teaching in several ways beginning with painting an apple, the icon for sin, in the hand of a baby. Notice that all of the infants are naked. In and of themselves they are helpless and

have absolutely nothing to offer to make themselves worthy recipients of Baptism. On their own they cannot even come to Jesus, so faithful parents bring their little ones. It is Jesus who takes them, embraces them, and makes them His own. His grace is pure gift! Christ is the heart and center of the painting and the Christian faith drawing all people, including you and me, to Himself in the blessing of the sacrament of Holy Baptism. “Let the children come to Me, and do not hinder them, for as such belongs the kingdom of God. Truly I say to you, whoever does not receive the kingdom of God like a little child shall not enter it.” Luke18:16-17

Additional information: It has been said that Cranach sometimes portrayed the Luther children in his paintings. Notice the child wearing black in the foreground next to the mother in bright red  Perhaps this is a little Luther!

The above version of Cranach the Elder’s Let the Little Children Come to Me resides at the Städel Museum in Frankfurt, Germany.