In Genesis 3:15 we hear of the great promise of redemption for fallen mankind. The Lord promised that the Seed of the woman would crush the head of the serpent. Adam and Eve trusted this promise, possibly even looking at the birth of their first born son, Cain, as its fulfillment (Genesis 4:1). However, as Genesis chapter 4 continues we learn how Cain dashed that hope as he rose up and murdered his brother Abel.

After the Lord confronted Cain, he “went away from the presence of the Lord and settled in the land of Nod, east of Eden” (Genesis 4:16). Here we see the separation of the “Cainites,” as Luther calls them, and the lineage of Adam through Seth, born after Abel’s murder. The promise of the Seed would continue through Seth, whose lineage is traced in chapter 5 down to Noah.

In verse 1 and 2 we hear how the “sons of God” (the Sethites) found the “daughters of men” (the Cainites) to be attractive and so were taking them for their wives. God had separated Cain’s family from Seth’s family and yet, after some time, the sons of Seth began to intermarry with the daughters of Cain.

Luther writes: “Adam undoubtedly urged his descendants also to beware of the church of the evildoers and not to intermarry with the accursed race of Cain. For a time his descendants obeyed this advice or command. But when Adam had died and the respect for the remaining patriarchs declined, the sons of God (that is, those who had the promise of the blessed Seed and belonged to the blessed Seed) also yearned for marriages and affinity with the ungodly race.”[1] 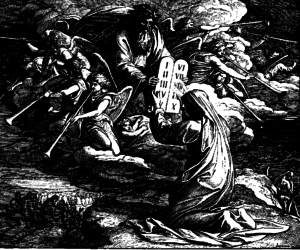 1. Luther also wrote, “the sin of the first world consisted in this, that men despised the authority of their fathers and took their wives from the Cainites, as many as they pleased and whomever they chose, obviously under the dominating influence of lust.”[2] Why was the union of the “sons of God” to the “daughters of men” displeasing to God?

2. Though the Ten Commandments were given to Israel much later, how can we understand this sin in light of the First Table of the Law (Commandments 1-3) and in light of the Fourth Commandment?
Luther suggests that Noah or perhaps his father, Lamech, declared the Lord’s words, in verse 3, to the world. “[They] came to close with this declaration: ‘My Spirit will no longer judge among men. That is, we are teaching in vain; we are warning in vain; the world does not want to be improved.’”[3] This idea of a public declaration fits well with St. Peter, who calls Noah, “a herald of righteousness” (2 Peter 2:5). Noah warned the sons of God who had arrogantly followed in the sins of the Cainites to repent and yet they would not.

3. Luther goes on to say, “This is, therefore, the utmost punishment that the Lord threatens by the mouth of His holy patriarchs in this passage, namely, that He will no longer judge men through His Spirit, that is, that after this He is unwilling to grant His Word to men, since all teaching is in vain.”[4] What warning can we, the baptized sons and daughters of God, take from this verse?

In Genesis 8:21, the Lord echoes His words in 6:5, that “every intention of the thoughts of his [man’s] heart was only evil continually.” Luther says, “Hence we draw the universal conclusion that without the Holy Spirit and without grace man can do nothing but sin and so goes on endlessly from sin to sin. But when there is also this added element that he does not uphold sound doctrine, rejects the Word of salvation, and resists the Holy Spirit, then, with the support of his free will, he also becomes an enemy of God, blasphemes the Holy Spirit, and completely follows the evil desires of his heart. ”[5]

4. The conventional wisdom of the world encourages you to “follow your heart.” According to these passages (also see: Matthew 15:18-19) why might this not be the most sound Christian advice?

Again, Luther, commenting on verses 5-6: “But when we discuss free will, we ask what its powers are from the theological point of view, not in civil affairs or in matters within the realm of reason. We maintain, however, that man without the Holy Spirit is completely ungodly before God, even if he were adorned with all the virtues of all the heathen.”[6]

5. In matters below us, matters of daily life, we all have the freedom to choose many things. However, in the matter of faith, man has no free will. Man, by nature, cannot and will not choose to become a faithful child of God. Rather, according to our nature we are “completely ungodly” even if we were the most upstanding citizen in the civil realm. It is the work of the Holy Spirit, through the Word of God, which makes us children of God and heirs of eternal life. How does this Scriptural understanding actually give us a sure and certain hope when it comes to matters of salvation?

Though the Lord declared that He was going to blot out man from the face of the earth, in verse 7, “Noah found favor in the eyes of the Lord” (6:8). “[Here] is a new expression of the Holy Spirit—an expression which the heavenly messenger Gabriel also employs when addressing the Blessed Virgin (Luke 1:30): “You have found favor with God.” This expression very clearly rules out any merit and gives praise to faith, by which alone we are justified before God, that is, are acceptable to God and please Him.”

The Lord is ever faithful to His promises. He promised the Seed of the woman, our Lord and Savior Jesus, to Adam and Eve. Even though the descendants of Seth were led astray to follow in the sins of the Cainites, chasing after fleshly beauty and strength rather than abiding in the promise of God, still the Lord provided for the Seed. He looked favorably upon Noah out of pure grace, so that the from Noah’s lineage that Savior would come to save us, sinful sons and daughters of Adam, through the shedding of His blood.