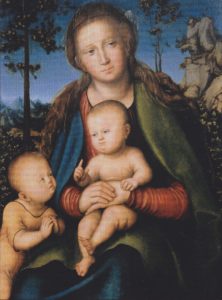 It’s probably not what you think. In his devotional writings on the Magnificat, Luther carefully outlines how we should and should not honor this “Most Blessed Virgin Mother.” Luther neither wants to give her false attributes or idolatrous devotion, nor does he want to depreciate “her unique place in the whole of mankind, among which she has no equal” as the Mother of God. The Lutheran Confessions (Article XXI of the Augsburg Confession and Apology) support Luther in giving a threefold outline for how Christians may appropriately give honor to Mary and all other saints. Additionally, how Christians speak about her reflects what the Church believes about Christ’s nature and His disposition towards His creation.

To those who believe that Mary has earned this place of honor by her own merit or worthiness, Luther points to her own words regarding her lowliness and the work of God the Father in her as His handmaiden. Luther asserts that she is not chosen because she is “rich, comely, youthful, cultured, and held in high renown by all the people. To her neighbors and their daughters she was but a simple maiden… doubtless esteemed no more than any poor maidservant today.”[1] She is called blessed not because of her own merit or worthiness, but because God bestowed this gift on her, doing this mighty work within her Himself. Luther states, “She does not say men shall speak all manner of good of her, praise her virtues, exalt her virginity or her humility, or sing of what she has done. But for this one thing alone, that God regarded her, will men call her blessed. [She] lays claim to nothing and counts only Him as great.”[2] Though he admits that the title “Queen of Heaven” is a “true enough name,” Luther cautions the reader not to make too much of it.[3] He warns against those who have made it a custom to detract from her lowliness and humility by elevating her to a position like that of a goddess, who could possess divine attributes equal to Christ and merit this place on her own, thus despising the grace of God. In this exalted position, she becomes for many a co-redemptrix to whom people “pray and flee to rather than God.”[4] Melanchthon agrees, “Even though she is worthy of the highest honor, nevertheless she does not want herself to be made equal with Christ but instead wants us to consider and follow her example.”[5] 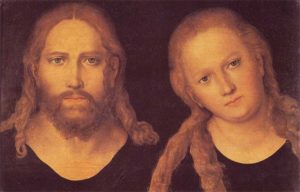 In response, many Protestants go to the opposite extreme and throw the proverbial baby out with the bathwater, refusing to give any honor to Mary because it could be seen as idolatry. This is somewhat misguided and seems more often motivated by self-righteousness than a true conflict with Scripture, the Confessions, and even the Church Fathers and Mothers.  It has led to an unfortunate and troubling practice among many Protestants and Lutherans, not only with regard to Mary and the saints, but also in other areas of Christian practice. If something merely looks or sounds “too Catholic” in personal piety or corporate worship, then it is discarded as if we do not both possess the same gifts that Christ has bestowed upon His Church. Rather than enjoying the richness these things have contributed to the worship and devotional life of Christians for millennia, many choose to go without, guided instead by their own sense of piety.

Luther, however, is unafraid of giving Mary all the honor she deserves. Eagerly, he calls her “the most blessed Mother of God, the most blessed Virgin Mary, the Mother of Christ,” and yes, even “the Queen of Heaven.”[6] He also marvels at her faith and humility, asking, “Was not hers a wondrous soul?”[7] That she is given the unique place as the Mother of God, Luther writes, “No one can say anything greater of her or to her, though he has as many tongues as there are leaves on the trees, or grass in the fields, or stars in the sky, or sand by the sea.”[8] 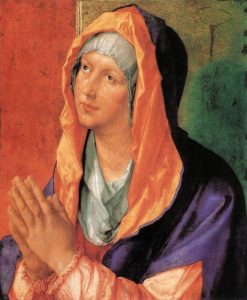 As a good teacher, Luther does not use these titles to give her honor without reason. He knows there is something of great value to be learned from them.  As Article XXI of the Apology declares, by honoring the saints Christians are “taught to give thanks to God, to be strengthened in faith and encouraged to imitate the faith and virtues of them.”[9] How we speak of Mary and the work of God in her is also a confession of what we believe about Christ and His work in us. By saying that Mary is the Mother of God, Christians confesses that Christ is both God and Man, two natures united in one person. In Mary we see God choosing to place Himself inside her womb and are reminded that He also chooses to place Himself inside of us through His Word and Sacraments.  Furthermore, in Mary’s lowliness and humility, we see the Lord’s grace and hand of mercy towards us lowly sinners, as St. Paul says, “God chose what is foolish in the world to shame the wise; God chose what is weak in the world to shame the strong.”[10] Christians are encouraged that even in our poor, despised and lowly state, God chooses to bestow his grace and favor upon us, like Mary, by working His mighty deeds in us.