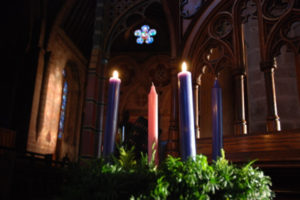 At a time when much of the world is frantically gift shopping, putting up Christmas lawn decorations and anticipating the arrival of Santa Claus, Christians around the world are observing the liturgical season of Advent. From the Latin word for “coming”, Advent is a time of preparation and anticipation for the coming of Christ both in the past in His incarnation as the baby Jesus, but also in the future with His promised second coming as Christ Triumphant. Furthermore, Advent is a time to focus on His present coming to us in the Word and Sacraments[1]. In the Lutheran church there have been many traditions observed during Advent that help Christians to both prepare for and anticipate His coming at this time.  Martin Luther encouraged families to observe Advent as a time for them to teach their children about the coming of Christ.

Advent marks the beginning of the church calendar. It traditionally starts on the Sunday closest to St. Andrew’s Day (November 30th) and continues for four Sundays until Christmas. During this time the liturgical paraments and vestments in many churches will change to violet to recognize Advent as a time of preparation and repentance as well as a symbol of the royalty of the coming King. The color blue can also be used as a symbol of anticipation and hope.

Christians in many countries have adopted various traditions of lighting candles during Advent to observe this as the time of the coming of Christ who is the light of the world. One widespread tradition is the use of an Advent wreath both in the church and the home to mark each Sunday in the Advent season. While the origin of this as an Advent tradition dates back to the Lutheran church following the Reformation, the current form commonly used today was developed more recently and is used in many other Christian churches throughout the world. The wreath is made out of evergreens in the shape of a circle to represent eternal life. It consisted of four candles originally; three purple or blue candles to match the liturgical colors and one pink candle lit on the 3rd Sunday in Advent. This 3rd Sunday is known as Gaudete Sunday, meaning “rejoice” in Latin and comes from Philippians 4:4. Lighting this 3rd candle, Christians relax the fast to rejoice for the promised Messiah is coming soon. Many Advent wreaths also have a 5th candle, the Christ candle, which is lit during the time of Christmas, symbolizing that Christ, the light of the world, has entered the darkness. 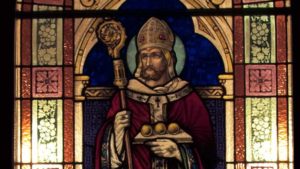 Another tradition, is the observance of special commemoration days during the season of Advent, namely St. Nicholas, Bishop of Myra on December 6th and St. Lucia, Martyr on December 13th. As numerous stories surrounding St. Nicholas spread and became legend, Martin Luther was concerned that the observance of St. Nicholas day was becoming separated from Christ the true giver of gifts. As a response and an effort to replace St. Nicholas Day, Luther began the tradition of celebrating the Christkindt or Christ Child who would bring gifts to children on Christmas Eve. Though Luther hoped to eliminate the secular traditions surrounding St. Nicholas, Lutherans today still observe his commemoration and give thanks to God for the gifts He gave him to bless others and confess Christ in a time of darkness and persecution. St. Lucia was a Christian martyr in the 4th century who is traditionally known as wearing a candle-lit crown to light her way through the catacombs as she brought food to Christians who were being persecuted. Her commemoration is meant to signal that Christmas is coming soon when Christ, the light of the world will arrive. Today many Christians throughout the world celebrate by lighting candles and attending major festivals not only to commemorate her confession of faith and care for persecuted Christians, but in anticipation of the coming of the Christ child.

There is so much beauty and rich tradition during the season of Advent to prepare Christians for the coming of Jesus, the babe of Bethlehem. When you see the altar draped in purple, remember your King who came to bring you life and salvation. If you don’t have one already, consider getting an Advent wreath for your home as you prepare for the coming of Christ, the light of the world. Give thanks to God for the confession of faith He gave to His people to shine His light in dark places. Learn about the tradition of reciting the O Antiphons (found in Lutheran Service Book along with hymn # 357 “O Come, O Come, Emmanuel) and incorporate it into your Advent devotions. Finally, anticipate with joy the coming of our Lord!