by Mr. Jonathan A. Swett

The uplifting expression of faith and joy at Christ’s second coming in “The Bridegroom Soon Will Call Us” (LSB 514) by Johann Walter and Michael Praetorius reminds us that there is meaningful history in so many of our great Lutheran hymns.

You may recall that Walter is affectionately known as the “first cantor of the Lutheran Church,” and as such significantly shaped the musical life of the church of the Reformation and the centuries that followed.  Born in Kahla in central Germany in 1496 where he likely attended the Latin school and served as a choirboy, little else is known of Walter until he entered the court chapel of Frederick the Wise in 1517 to serve as a bass singer and composer.  In 1524, the same year he became Kapellmeister in Torgau, Walter published his Geystliche gesangk Buchleyn—a collection of 43 pieces for three, four, and five voices arranged according to the church year.  In 1548, during the tumultuous time following Luther’s death two years prior, Walter accepted the invitation of the new Elector Moritz to organize and direct music for the court chapel in Dresden.  After six short years he returned to Torgau where he would later die on March 25, 1570. 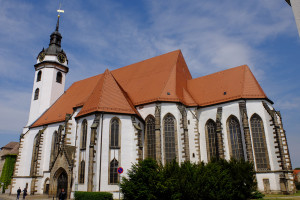 Much like Martin Luther, Walter devoted considerable effort to developing a proper understanding of the use of music in the Christian community.  In 1525 Luther enlisted the help of Walter and his mentor, Conrad Rupsch, to prepare music for his Deudsche Messe (German Mass).  One of Walter’s last works was a large-scale collection of polyphonic music as a tribute to his friend and colleague Luther and based on his “very last hymn” (Das christlich Kinderlied D. Martini Lutheri Erhalt uns Herr, 1566).

Born in Creuzburg in 1571 and living until 1621, Praetorius’ life and music also had considerable influence on the music of early Lutheranism—by exhibiting both a firm commitment to the heritage of the Reformation and an openness to developing changes in musical style—serving as an important bridge from the Renaissance to the emerging Baroque period.  His career began with a three-year stint as organist in Frankfurt beginning in 1586 followed by a relocation to Wolfenbuettel where he would serve under the patronage and protection of Duke Heinrich Julius from 1595-1613.  During this time Praetorius established himself as the leading Lutheran Kapellmeister and composer in Germany and published his most significant contribution to music and the chorale, Musae Sioniae (1605-10), a nine-volume collection containing 1,244 varied settings of Lutheran chorales.  Praetorius also proved to possess musicological skill as evidenced by his three-volume encyclopedia of the art and practice of music titled Syntagma musicum, an invaluable resource to understanding music of the late 16th and early 17th centuries. 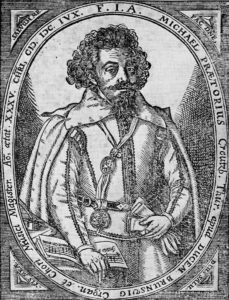 Praetorius was born the year after Walter’s death and attended the Latin School in Torgau where his father had previously taught and was a colleague of Walter’s during his time at the school as cantor.  His concern that music be solidly rooted and grounded in theology was an echo of both Luther and Walter.  Deemed as the “conservator of the chorale” because of his intense devotion and efforts in the medium, Praetorius has been lauded by Friedrich Blume as “literally the successor of Johann Walter,” and “the most vigorous representative of Lutheran orthodoxy in the whole history of church music.”1

Using a 16th century folk song as inspiration, Walter crafted a 34-stanza poem titled “A Beautiful Spiritual and Christian New Miners’ Song of the Last Day and Eternal Life” which was first published in Wittenberg in 1552.  Melchior Franck used stanzas 31, 8, 9, 16, 18, 17, and 13 of the poem (in that order) to create a hymn which began with “Der Bräutgam wird bald rufen” (“The Bridegroom Soon Will Call Us”) and included it in his publication Rosetulum musicum (Coburg, 1627).  The hymn appears in this seven-stanza format in The Lutheran Hymnal.  Lutheran Worship and Lutheran Service Book on the other hand are further condensed four-stanza versions: LW presents stanzas 31, 8, 16, and 18 while LSB presents stanzas 31, 8, 13, and 18.  The folk element has been lost but what remains is a meaningful and clear emphasis on the parable of the ten virgins (Matt. 25:1-13).  The tune Ach Gott vom Himmelreiche appeared as edited by Praetorius in volume seven of his Musae Sioniae (1609).  Its rise to common use can be attributed to the inclusion of the tune in Fredrich Layriz’ chorale book Geistliche Melodien (1848).

The second Advent of Christ is not one that Christians are to fear, yet one for which we are to be prepared (st. 1).  The entrance into Christ’s kingdom of glory in the company of the heavenly hosts is a glorious vision indeed (st. 2) where we will forever be free from all sin, sorrow, and suffering (st. 3).  The chorus of all the saints in heaven at the marriage feast of the Lamb will forever sound in praise of the One who raises all believers unto life everlasting (st. 4).  Thanks be to God!

Jonathan A. Swett is kantor of Our Savior Evangelical Lutheran Church and School, Hartland, Mich.