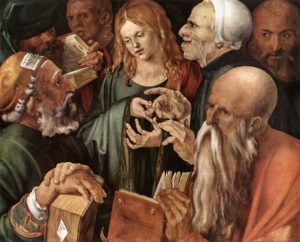 Faces, hands, and books swirl around the divine Child in Albrecht Dürer’s oil painting Christ Among the Doctors. The artist’s rendition of Luke 2:41-52 is far from a typical, placid, generic temple scene. Rather the mood is surreal and has a nightmarish quality. Dürer draws you, the viewer, into the inner sanctum of the learned theologians. The black background colors the ominous scene. In the center of the dark and hostile environment shines the Light of the World.

The painting spotlights the first recorded words of Jesus in Scripture and their profound earthly and eternal implications. “Why are you looking for Me? Did you not know that I must be in my Father’s house?” (Luke 2:49).  In these words we hear the Word Made Flesh. We see the flesh of the Incarnate God. Although Luke does not specifically identify the topics of discourse, in these short questions Jesus identifies Himself as true God, the Father’s Son, who “must” fulfill His purpose as the Messiah, the Father’s Anointed One to rescue mankind from sin and death. As Passover lambs are sacrificed in the temple, the Passover Lamb teaches about his upcoming sacrifice in Jerusalem.

“The Lord whom you seek will suddenly come to His temple” (Malachi 3:1). Dürer portrays the twelve-year-old Jesus as serene, confident, and glowing with life.  His warm and fresh coloring contrasts sharply with the corpse-like tone of the satanic, ugly man gloating at His side. As Jesus gestures in making His points, the grotesque rabbi touches Christ’s fingers and arm as if to control, overwhelm, and dominate. The evil finger over the heart and center of the Child forebodes mortal danger. Together the four hands make a spinning whirl symbolic of the combat stupendous between life and death that began in the Garden of Eden and reached its zenith on Calvary’s cross.

Dürer blends his own contemporary Renaissance time period with the early New Testament era. Scrolls become books. Clothing is a mixture of both times and cultures giving the painting a universal dimension. The wreath of faces encircling the young Jesus presents a microcosm of not only those confronted with the Son of God during His earthly ministry, but of all people of all times and all places. Unbelief and faith are exposed in the expressive quality of faces and hands. In the right-hand corner an ancient white bearded doctor earnestly holds his open book as he waits for his chance to refute the young boy. Eyes averted from the presence of Christ, he clings to the authority of the Law. Above him a sinister, dark visage peers with skeptical eyes. Almost touching Jesus on the left, an angry face confronts the viewer. Beneath him a man argues from an open book. A hat covering his eyes blinds him to the Way, the Truth, and the Life standing just inches away. But yet there is faith! In the lower left an elderly man clearly learned in Old Testament Scripture is identified as a Pharisee by the insignia on his hat. Perhaps he is Nicodemus, the teacher of Israel, who became a follower of Christ. Jesus looks on him with compassion. Peaceful hands rest on the closed book. It is here that Albrecht Dürer makes his own confession of faith by placing his signature on the paper bookmark. It is here that you and I belong “looking to Jesus the founder and perfecter of our faith, who for the joy that was set before Him endured the cross, despising the shame, and is seated at the right hand of the throne of God” (Hebrews 12:2).

Additional information: The Latin words “Opus quinque dierum” under Dürer signature monogram on the bookmark indicate that the work was amazingly completed in only five days. The 1506 painting is oil on poplar and measures 65×80 cm. Today it is housed in the Museo Thyssen-Bornemisza, Madrid.