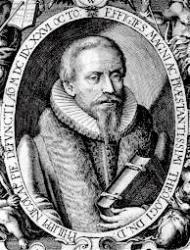 Philipp Nicolai’s two most famous hymns–for which he was both author and composer–are “Wake, Awake, for Night Is Flying” (Wachet auf, ruft uns die Stimme) and “O Morning Star, How Fair and Bright” (Wie schön leuchtet der Morgenstern).  The fact that these have been commonly referred to as the “King and Queen of Chorales,” respectively, is evidence they were significant contributions to German hymnody of the late 16th and early 17th centuries.  They maintain their monumental status today as Hymns of the Day for The Last Sunday of the Church Year and The Epiphany of Our Lord.

Nicolai was born at Mengeringhausen in Waldeck on August 10, 1556.  He entered the University of Erfurt in 1575 and one year later went to Wittenberg where he graduated in 1579.  The son of a Lutheran pastor, Philipp received a Doctor of Divinity degree from Wittenberg University in 1594.  He assisted his father at Mengeringhausen and later gained his own appointment as pastor at Herdecke; however, political and theological tensions led to several relocations throughout his career.

A great plague struck in 1597 and 1598 during Nicolai’s time in Unna in Westphalia, causing him to bury many of its inhabitants.  During this period he prepared his Frewden-Spiegel dess ewigen Lebens (“Joyful Mirror of the Eternal Life”) , published in 1599.  His preface to this collection of meditations and three hymns, which included both the King and Queen of Chorales, is indicative of the challenging context and purpose for which it was prepared: “to leave behind me (if God should call me from this world) as a token of my peaceful, joyful, Christian departure, or (if God should spare me in health) to comfort other sufferers whom He should also visit with the pestilence.”  Nicolai survived until October 26, 1608, dying of a fever during his final post in Hamburg. 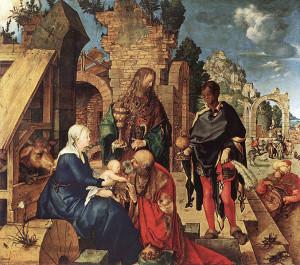 The original seven stanzas in German of “O Morning Star, How Fair and Bright” formed an acrostic—the opening letters of the stanzas refer to a former student of Nicolai’s, Wilhelm Ernst, Graf und Herr zu Waldeck.  Based on Psalm 45, the hymn quickly became extremely popular in Germany and was used for a variety of occasions.  The tune is believed to be a reconstruction of “Jauchzet dem Herren, alle lande,” Psalm 100, included in Wolff Köphel’s Psalter (1538).  The melody as presented in Lutheran Service Book is nearly identical to how it appeared in the Frewden-Spiegel.  J.S. Bach made use of the tune in several of his Cantatas, as well as a harmonization in his Choralgesänge, and as a basis for one of his Miscellaneous Preludes for organ.

The writing of Nicolai, of which “O Morning Star, How Fair and Bright” is no exception, marks a transition from the simplicity and appropriateness to church use of the Reformation period hymns to a more subjective and experimental period of German hymn writing.  Many wonderful texts to come from prolific hymn writers were ushered along by a series of hymns of love to Christ as the Bridegroom of the soul, giving the church a new voice in song.