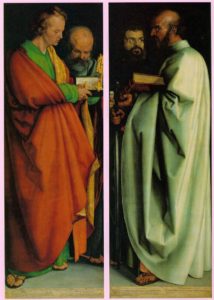 Both Lutherans and Roman Catholics claim Albrecht Dürer as their own. So what was he? Lutheran or Roman Catholic?  Dürer’s life (1471-1528) spanned the tumultuous period of dynamic social, ecclesiastical, political, and theological change brought about by the Reformation. For years the artist gave visual expression to his ardent Roman Catholic beliefs in many woodcuts, engravings, and paintings. However, by the end of his life both Dürer and his native Nürnberg had undergone a dramatic theological change due to the Reformation.

On March 17, 1525, the city council of Nürnberg voted to sever all ties with Rome and the pope. This Bavarian city, located in Franconia, quickly transitioned to Lutheranism. Relics were no longer paraded through the streets, convents and monasteries were confiscated, the Lutheran liturgy was sung, Lutheran sermons were preached, and not only were both the body and blood of Christ distributed in the Lord’s Supper, but it was also forbidden to teach that it was merely a symbolic communion. It is in this Lutheran context that Albrecht Dürer produced his greatest, his last, and his most powerful painting, The Four Holy Men.

On October 6, 1526, Dürer gifted his masterpiece to the city fathers of Nürnberg with the words, “…to show respect for your excellencies…I have painted a panel upon which I have bestowed more trouble than on any other painting…”[i]  It is exquisite, technically superb, and magnificently crafted in an entirely new way from all of Dürer’s earlier works. Larger than life, The Four Holy Men consists of two panels composing one painting with a stunning visualization of the authority of the Word of God. On the left, St. John holds a New Testament open to the first words of his Gospel: “In the beginning was the Word and the Word was with God…”  Behind him St. Peter is seen with the key to heaven. His demeanor is not that of an authoritative pope, but rather his head bows in reverence and submission to Holy Scripture. On the right, St. Paul firmly grasps a Bible in one hand and clutches his sword in the other, bringing to mind his words in Ephesians 6:17: “Take the helmet of salvation and the sword of the Spirit which is the Word of God.” In the background the Evangelist Mark holds the scroll of his Gospel. “Of Saint Mark’s Gospel Dürer said that it was as alive as if it had hands and feet.”[ii] Seen together, the two panels illustrate the complete power, beauty, and authority of the living Word of God.

As remarkable as this visual confession of faith is, Dürer adds an innovative written confession in calligraphy at the bottom of both panels. It begins with a warning based on Rev. 22:18-19: “All worldly rulers in this threatening time, beware not to take human delusion for the Word of God. For God wishes nothing added to his Word, nor taken from it. Take heed of the admonition of these four excellent men, Peter, John, Paul and Mark.”[iii] Following this, Dürer lists verses from Scripture written by each of the Four Holy Men: 1 John 4:1-3; 2 Tim. 3:1-7; Mark 12:38-40; and 2 Peter 2:1-3. Every word is from The Septemberbibel, Luther’s German New Testament translation!

Lutheran or Roman Catholic? I think it can be safely said that Dürer, at the end of his earthly life, was steadfastly in the Lutheran camp. On April 6 each year, the Church commemorates Albrecht Dürer and Lucas Cranach as the two great artists of the Reformation. April 6 was Dürer’s death date.

Fascinating Subsequent History: The Four Holy Men remained in the Nürnberg Rathaus (town hall) for the next century. However, in 1627, the painting was taken to Munich by the Bavarian Duke Maximilian for his private collection. The people of Nürnberg were loath to give up their treasure, but had no choice. They hoped that when the Roman Catholic king would see Dürer’s Lutheran inscription he would send the artwork back. Instead Maximilian sawed off the offending bottom portions and sent them back to Nürnberg. It was not until 1922 that the written confession of Albrecht Dürer was reunited with his painting. Today The Four Holy Men still resides in Munich’s Alte Pinakothek, but the people of Nürnberg would gladly have their Dürer masterpiece back.