Although most historians would probably date the beginning of the Protestant Reformation to Luther’s publication of the 95 Theses in 1517, it has long been recognized that the Reformers of the 16th century did not appear out of thin air. Although we could speak of many broad societal trends which led to the outbreak of the Reformation, it is important to recognize the initiative of individuals. Below we will discuss two of the most significant proto-reformers: John Wycliffe (ca. 1320-1384) and Jan Hus (1369-1415). 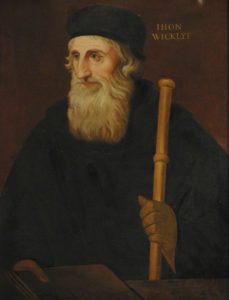 John Wycliffe was born in the village of Hipswell in the vicinity of Yorkshire in the north of England at some point in the early to mid-1320s. To the extent that historians can reconstruct his early life, he seems to have received his education close to his parents’ home. Later (possibly in the mid-1340s) he arrived at Oxford where he pursued higher education. In 1356, Wycliffe earned his Master’s degree. He was soon appointed to the head of Balliol College, Oxford. After this, he was a priest at a number of parishes. Later, he became the head of Canterbury Hall, where he worked with a group of young men preparing for the priesthood. In the midst of all this, he earned a bachelor’s degree and doctorate in theology. Finally, Wycliffe was granted the position of rector at Ludgershall close to Oxford, something that allowed him to continue to participate in the life of the university.

Although Wycliffe appears to have broken with the theology of the medieval Church at some point early in his career, in 1374 his reforming career took a new turn. He was appointed to a commission by the English government to work out a series of disputed questions of jurisdiction between the pope and the King of England in the Belgian city of Bruges. When he returned from the negotiations, Wycliffe was apparently so unhappy with his encounter with the papal representatives that he began to write a series of tracts promoting ideas of reform. Specifically, he attacked the sale of Church offices (known as “simony” named after Simon Magus in Acts 8) and the practice of indulgences.

From this point forward, the rest of Wycliffe’s life was tied up in a series of official and unofficial tribunals. It would be extremely tedious to go through all of them in detail, but it is sufficient to say that Wycliffe was generally able to rally the support of members of the secular English government as long as he confined his protests to abuses of 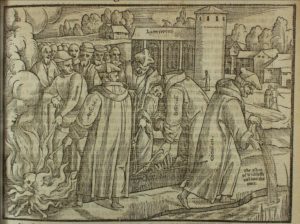 Church power. When Wycliffe began to reformulate Christian doctrine, he largely lost the support of the secular English government. In spite of all this, Wycliffe was never executed for heresy in his life time and died a relatively old man in 1384, probably in his mid-60s. Nevertheless, long after his death, the Council of Constance (1415) specified that his grave should be dug up and his bones be burned as a sign of his condemnation for heresy.

In regard to his theological proposals, Wycliffe held several key beliefs possessed both in continuity and discontinuity with the later Reformation. First, like Luther, Wycliffe believed that salvation comes by grace alone. Nevertheless, unlike Luther, Wycliffe did not take this teaching to its logical conclusion and posit that salvation received by faith alone. Much like St. Augustine, Wycliffe held that grace induces works which merit salvation. Similarly, much like Luther, Wycliffe also posited the supreme authority of Scripture within the life of the Church (Sola Scriptura). He also held that the Bible should be translated into the language of the common people, something his followers (called “Lollards”) would later do. Nevertheless, unlike Luther, who emphasized the centrality of the gospel to our understanding of Scripture, Wycliffe believed that the Bible should be translated in order that people might be more aware of which works God desired of them. Wycliffe often contrasted the works commended by Scripture with those prescribed by the Church in the form of pilgrimages, indulgences, and veneration of the saints. Hence, although many of Wycliffe’s beliefs bear superficial similarity to those of Luther’s, they nonetheless remain stuck in limitations of medieval theology and its essential legalism. 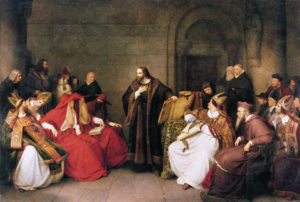 The second proto-reformer we will discuss is Jan Hus. Hus was born in Husinec in what is the now the southern Czech Republic in 1369. At the time, this region was known as “Bohemia.” Around 1390, Hus began to attend the University of Prague. By 1394, he had earned a Master’s degree and began to teach on its philosophy faculty. By 1401, he was the head of the philosophy department. During this period, he was heavily influenced by a number of teachers at the university who had read Wycliffe’s philosophical works. This philosophical engagement with Wycliffe spurred Hus to take an interest in his theological works, many of which criticized the theology of the late medieval Church and advocated various reforms.

This interest in Church reform connected Hus with the followers of Jan Milíč, a theologian who had promoted Wycliffe’s reforms in Bohemia. In the early 15th century, the Church was weak due to a schism that had resulted in the simultaneous election of multiple popes. Although Milíč had died some years earlier, his followers preached in the in the local Czech dialect at the Bethlehem chapel in Prague. Hus joined them and increasingly gained fame as a popular preacher. During this period, he increasingly promoted theological and ecclesiastical reforms that represented moderate versions of those originally proposed by Wycliffe.

After several confrontations with the local Archbishop, Hus (much like Luther) entered into a conflict with the Roman curia for publicly preaching against indulgences. This eventually led to him being driven out his university and ministerial positions in Prague. For the next few years, Hus lived in several different castles owned by Czech noblemen who were supportive of his reforms. There he wrote many books and treatises, including his most important work entitled On the Church. In this book, he promoted a belief in the priesthood of all believers and rejected the power of the papacy. 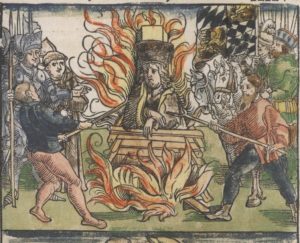 In late 1414, a reforming council met in the city of Constance, Switzerland in order to solve the issue of the papal schism. The council sent emissaries to Bohemia to invite Hus and his colleague Jerome of Prague to attend and explain their views. As might be expected, Hus was reluctant, but he was induced by a promise of safe conduct by the newly elected Holy Roman Emperor Sigismund. Once in Constance, the safe conduct was revoked, under only mild protests from the Emperor. The Council tried Hus and Jerome for heresy, urging them to recant his view lest they be executed. Both men refused and were eventually burned at the stake on July 6, 1415 for promoting Wycliffe’s heresies.

Although their theological proposals were often deeply flawed, both Wycliffe and Hus raised important issues regarding the institutional Church’s abuse of its powers. For this reason, Lutheran Christians can be grateful to these forerunners of the Reformation for paving the way for Luther’s more complete and biblical sound reforms.