by Rev. Jesse A. Burns

St. Paul calls Abraham, “the man of faith.” He writes, “Know then that it is those of faith who are the sons of Abraham. And the Scripture, foreseeing that God would justify the Gentiles by faith, preached the gospel beforehand to Abraham, saying, ‘In you shall all the nations be blessed.’ So then, those who are of faith are blessed along with Abraham, the man of faith.” (Galatians 3:7–9)

The true children of Abraham are not his blood offspring but those who share the same faith as Abraham—faith in the promised Seed of Abraham, our Lord Jesus Christ. Jesus once said to some of those who were offended by His teaching, “Your father Abraham rejoiced that he would see my day. He saw it and was glad.” (John 8:56) Abraham rejoiced in the day of Jesus, not by physical sight, but by faith in God’s promise to him! 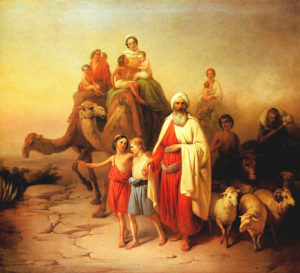 Luther says of the first verse, “Therefore this passage is important as proof for the doctrine of grace over against the worth of merits and works, which reason extols so highly. For if you should ask what Abraham was before he was called by a merciful God, Joshua (24:2) answers that he was an idolater, that is, that he deserved death and eternal damnation. But in this wretched state God does not cast him away; He calls him and through the call makes everything out of him who is nothing.”[1]

1. In Joshua 24:2 we learn that Abraham and his father Terah “served other gods.’” How does understanding Abraham’s former idolatry help us to understand that faith and salvation come to us not through our own merit but by God’s grace alone?

“Let us not forget Ur of the Chaldeans, and that Abraham was an idolater when he lived there. That is, let us teach that even the greatest saints were human beings who could fall into sins and often fell horribly; but when they were saved and later on were endowed with various gifts, this is entirely the result of God’s mercy, who calls us by His Word and does not cast us aside.”[2]

2. The Holy Spirit does not present the great heroes of the Bible as perfect men and women but, rather, often records their failures. We learn in Scripture that these great saints also fell, sometimes into very grave sins. Abraham’s former idolatry, and some would argue what happened with Sarai during their sojourning in Egypt, is one example of this fact. But these records are not given that we might become secure in our sins or find excuses for them. Rather, we learn about God’s grace and forgiveness through the example of the patriarchs. What comfort do we have in the example of God’s gracious call of Abraham?

God called Abraham out of his country, away from his own people, and into a foreign land. To this command God attached great promises. First, He promised that Abraham would be made into a great nation and that he would be blessed. This in itself is a magnificent promise. But God also promised, “in you all the families of the earth shall be blessed.”

Luther writes about this promise, “But now there follows that promise which should be written in golden letters and should be extolled in the languages of all people, for it offers eternal treasures. For it cannot be understood in a material sense, namely, that it would be confined to this people only, as the previous blessings were. But if, as the words clearly indicate, this promise is to be extended to all nations, or families of the earth, who else, shall we say, has dispensed this blessing among all nations except the Son of God, our Lord Jesus Christ?”[3]

3. For what ultimate purpose does God single out Abraham and promise to make him into a great nation?

4. How is this good news for you, for people from every other land of the earth?

Like Abraham, we are saved by grace alone through faith alone. Yet, obedience flows out of faith. Abraham believed the promises of God, and so he obeyed what the Lord commanded him by leaving his native land and venturing into another. Luther contrasts Abraham’s obedience to the supposed obedience of those who entered into the monasteries of his day. He writes, “True obedience is not to do what you yourself choose or what you impose upon yourself, but what the Lord has commanded you through His Word. This definition is drawn from this very passage of Moses when he states about Abraham (Gen. 12:4): ‘So Abraham went, as the Lord had told him.’ Here you have obedience defined after the manner of the dialecticians, as something that requires the Word of God. Therefore when God is not speaking but is keeping silence, there can be no obedience. Moreover, it is not enough that God speaks; but it is necessary that He speaks to you.”[4] 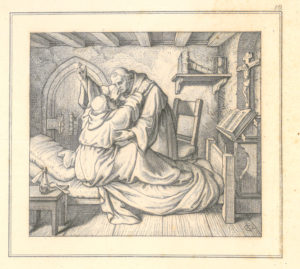 5. How was Abraham’s obedience different than the “obedience” of those who followed a monastic way of life?

Luther continues, “One must note, however, that the Lord also speaks to us through human beings. When parents give orders to their children, the tasks may seem insignificant and unimportant in their outward appearance; yet when the children obey, they are obeying not so much men as God. For God has commanded that parents should be obeyed.[5]

6. How did monasticism sometimes reject the Lord’s speaking through one’s parents?

7. People commonly express the desire to know what God’s will is for their life. Often, what they mean is that they want an extraordinary word or sign from God to give them direction for the decisions they must make in life. They might look at passages of Scripture which describe God’s sending of a message via extraordinary means and assume that this is the way in which God always operates. How is such an assumption misguided?

8. What other offices, besides Luther’s example of parents, are occupied by human beings that speak with an authority from God?

Abraham truly was a man of faith, as St. Paul called him. He was blessed by God and we, too, are blessed through him, not simply because Abraham is a good example for us to follow, but ultimately because of Abraham’s Seed. Abraham was declared righteous through faith in that coming Descendant, and we, like Abraham, are also declared righteous through faith in that Descendant who has come, our Lord Jesus Christ. Thanks be to God.