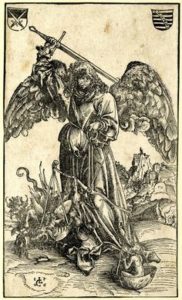 For centuries, speculation on the topic of angels has produced a plethora of false ideas, questions, and beliefs concerning nearly every aspect imaginable. Because of this, anyone who is beautiful, kind, helpful in a pinch, gifted musically, generous, or obedient (like your grandchildren) is called an angel. Some have even tried to provide false comfort to those who mourn by telling them that their loved one died because God needed another angel in heaven rather than pointing them to the promise of the Resurrection. From the argument that they don’t exist to saccharine images of chubby little babies[1] playing harps in heaven, these concepts have clouded our understanding and often shift our focus from what matters. They have become commonplace in modern secular society and have frequently crept into Christian thinking and belief throughout the history of the Church. As Western Christians celebrate the church festival of St. Michael and All Angels (also known as Michaelmas) during this Reformation 500 year, it is fitting to explore the topics of interest regarding angels that occupied the thoughts of the Reformers—namely, their existence and how they intervene on God’s behalf in the lives of Christians—and examine what the Church actually confesses concerning these creatures as taught from Holy Scripture.

“That angels are with us is very sure, and no one should ever have doubted it,” Martin Luther states matter-of-factly to any Christian who would question or deny their existence (What Luther Says, p. 23). Angels appear repeatedly throughout the Old and New Testaments and are present in all of the principal events of the life of Christ, from the Annunciation to the defeat of Satan in the Luke and Revelation accounts. Even those who would argue that many Scripture references to angels are actually talking about humans or the preincarnate Christ (which many, but not all, do) cannot ignore passages that talk about their existence as spiritual creatures, distinct from God and man: “He makes His angels winds, and His ministers a flame of fire” (Hebrews 1:7); and also, “Are they not all ministering spirits sent out to serve for the sake of those who are to inherit salvation?”(Hebrews 1:10). Not only do these passages point to the existence of angels, but they also show us the purpose for which they were created: to serve God and His Church. 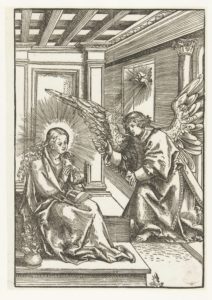 Perhaps the most important work of angels is in fulfilling the purpose from which they receive their name. As Luther explains, the term angel simply means “a messenger. . . Thus this name is commonly applied in Scripture to all messengers of God in heaven and on earth, whether they are the holy angels in heaven or prophets and apostles on earth. . . But the heavenly spirits in particular are called angels because they are the highest and noblest messengers of God” (What Luther Says, p. 23). Like a herald announcing the arrival of a king, the appearance of a good angel in Scripture is a signal calling all to hear the Word of the Lord and to see God’s mighty hand of salvation at work among them in Christ Jesus—for example, the angel in Luke: “Fear not, for behold, I bring you good news of great joy” (Luke 2:10). This task of proclaiming God’s Word is something they never cease from doing. Whether they are bringing His message to His people on earth or singing and shouting “Holy, Holy, Holy is the Lord God almighty” (Revelation 4:8) continuously in heaven, His words only are always on their lips.

Their other important work is to thwart the evil plans of Satan and his devils and defend the Church from their attacks. “For He will command His angels concerning you to guard you in all your ways” (Psalm 91:11). Evil angels are just as real as good angels, and though Christians should not fear them, we are called to be vigilant, for “the devil prowls around like a roaring lion, seeking someone to devour” (1 Peter 5:8). Or as Luther warns, “A Christian should know that he is sitting among devils and that the devil is closer to him than his coat or shirt, nay, closer than his own skin” (What Luther Says, p. 399). Evil angels use their superior power and intelligence to try to destroy humans at every opportunity; thus we pray with Luther each day, “Let Your holy angel be with me, that the evil foe may have no 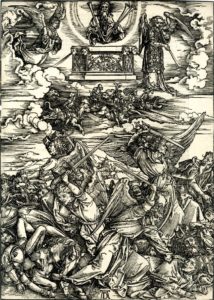 power over me” (Luther’s Morning Prayer). Despite the strength and cunning of these devils, they do not compare with the wisdom and power of God’s holy angels, who behold “the face of Our Lord God” and “stand in the presence of Him whose name is Omnipotens, the Almighty” (What Luther Says, p. 25). The message they bring is the greatest weapon they wield, for it is the Word given to them from the mouth of the Lord, as Christians around the world proclaim when they sing, “Though devils all the world should fill, All eager to devour us, We tremble not, we fear no ill; They shall not overpow’r us. This world’s prince may still Scowl fierce as he will, He can harm us none. He’s judged; the deed is done; One little word can fell him” (LSB 656:3).

Luther writes that “the acknowledgment of angels is needful in the church” (Luther’s Table Talk, p. 245), and so it would seem, based on what the Scriptures have revealed concerning the role and purpose for which God created them. Thus the Church has always held a doctrine of belief concerning angels. It is why the Church confesses that we “believe in one God . . . maker of . . . all things visible and invisible” (Apostles’ Creed, emphasis added) and why in the liturgy “with angels and archangels, we laud and magnify Your glorious name” (emphasis added). It is also why at the time of the Reformation, Luther insisted on retaining Michaelmas as one of the principal feast days of Christ that the Church should celebrate. On this day, Christians hear again “how the Lord used Michael and the angels to deliver His people from the accusations of Satan” (Collver III, 2011) and cast them out of heaven using the Word of Christ. 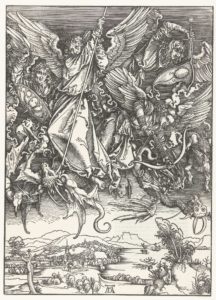 Delivered from Satan by the hand of Christ and His holy angels, Christians are now free to follow the examples set forth by these heavenly creatures. Just as the angels continuously carry the Word of God on their lips, we, too, respond to the lies of the devil and the needs of our neighbor with God’s almighty Word, which alone has the power to save. Furthermore, angels teach us how to walk in humble obedience to God, considering no work He gives them as too menial or beneath them. Of all the mighty works God commands His angels to do, He also gives them the noble task of caring for children, a task that many in this world may see as insignificant. Yet according to Luther, “the angels do it with joy; for it is well pleasing to God” (What Luther Says, p. 24). Finally, Christians regularly gather around the Word and Sacraments to join with the angels in continuously praising God for His Word and confession the mighty works of salvation He has done through Christ Jesus, singing, “For this, now and in days to be, Our praise shall rise, O Lord, to Thee, Whom all the angel hosts adore With grateful songs forevermore” (LSB 522:8).

[1] Luther thought these depictions of angels as infants or youth were meant to illustrate different characteristics of angels, such as them having “a brow free from wrinkle or sign of sorrow, and smoothly extended with joy, wearing a face plump and full with gladness.” (Luther on the Creation, in LW SE 1:357)