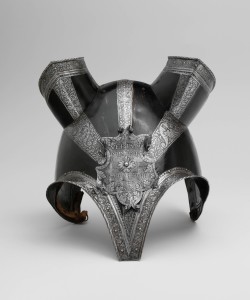 Shortly after the death of Luther in 1546, Pope Paul the III entered into an agreement with the Holy Roman Emperor, Charles the V.  This agreement stipulated that Charles would go to war against everyone who opposed the Council of Trent.  This was the council that the Pope had called a year earlier in order to define the exact boundaries of Catholic belief and practice.  The main target of this agreement was the Smalkaldic League, a group of German princes who supported Luther’s Reformation, and who, for the sake of collective security, had entered into an agreement of mutual defense.

Having defeated the Lutherans, Charles the V decided to impose a temporary religious settlement on them.  This religious settlement came to be known as the “Augsburg Interim.”  It was termed an “Interim” because it was intended only as a temporary measure while the Council of Trent determined what true Christian doctrine and practice was.  More or less, the Interim forcibly re-imposed late medieval Roman Catholicism on the Lutheran lands.  The only genuine concessions that the document made to the Reformation was that it allowed the marriage of priests and for the laity to receive both the bread and the wine during communion.

The Lutheran princes defeated by the Charles were given eighteen days to sign the Interim.  Most refused, on the advice of the major Lutheran theologians and pastors.  Lutheran pastors who rejected the Interim were persecuted, imprisoned, and executed.  Many of their families were killed, or died in exile as a result of the Interim.

Since the Augsburg Interim meet such stiff resistance, Maurice, along with Luther’s co-worker in the Reformation, Philipp Melanchthon, sought a compromise with an alternative document.  This document was referred to as the “Leipzig Interim,” after the city in which it was composed.  In this agreement, Melanchthon proposed that in order to reconcile with the Emperor, Lutherans should follow many medieval Catholic practices, while maintaining their core beliefs.  This agreement also proved extremely unpopular and was only ever enforced in cities and regions directly controlled by imperial troops.

Beyond these problems, the “Gnesio-Lutherans” or “Genuine Lutherans” led by Matthias Flacius, objected to the agreement on theological grounds.  They claimed that in situations where one’s confession of faith was being attacked by false teachers, one is under the obligation not to yield in matters of either doctrine or practice.  Indeed, one should not even make concessions in regard to practices which under normal circumstances would represent things of indifference or “adiaphora.”  To yield in external practices to false teachers would give the impression that one agrees with false doctrine, thereby also compromising one’s public witness to the faith.

Ultimately, Maurice realized that the second Interim was politically a non-starter and eventually switched sides and allied himself with the other Lutheran princes against the Emperor.  This led to a second war, wherein the Lutherans defeated Charles.  As a result, the Lutheran princes gained liberty to follow their conscience in regard to religion, first at the Treaty of Passau (1552) and then in a more complete form with the Peace of Augsburg (1555).

Although it is very unlikely that many contemporary western Christians will ever suffer the persecution that the early Lutherans did, the experience of the Church during the Augsburg Interim represents an important model of witness.  When our faith is challenged, it is important to maintain our witness in both word and deed.  When attacked by the unbelieving world, we should speak and act in such a way as to give witness to the truth and freedom that the gospel provides.  In all circumstances, we should avoid giving the impression of agreeing with false teaching, even if it is expedient to do so at the time.

Jack Kilcrease is a member of Our Savior Lutheran Church, Grand Rapids, MI.