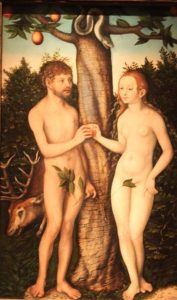 All lies about death started with this simple statement. It is not however, just the first lie among many about death; it is also every lie about life, because at its core it says that God, who is Life, is a liar. This is nothing less than unbelief which leads to death. Faith, on the other hand, agrees with the Word of God and rejects the lies of Satan. Martin Luther in his Genesis commentary describes the temptation of Eve where he says that it was one thing to “turn away from God and His Word and lend her ears to Satan. But far more serious…Eve agrees with Satan when he charges God with lying” (AE I,156). Rather than having faith that gives life, Eve chose unbelief that resulted in death.

Since the Fall, lies about what the Word of God says concerning death and life have spread and manifested themselves in various ways. During the Reformation, Martin Luther worked to combat many of these lies that existed in both society and the church. Of significance was his condemnation of the prevalent beliefs concerning procreation and monastic celibacy. Of procreation, Luther said it was “the greatest work of God” and “a most outstanding gift.” However, instead of celebrating the promise of life given to Adam and Eve in the garden, Luther’s society considered procreation to be a disease that was shameful and unholy. Truly pious individuals abstained from having children because they believed a lie rather than the Word of God which said, “Be fruitful and multiply” (Genesis 1:28). Luther called this “barbarous” and “inhuman.” Furthermore, Luther condemned the practice of forced celibacy within the monastic system as unbiblical and wrought with all sorts of unspeakable atrocities, such as fornication, prostitution, and the killing of unwanted children to cover up their indiscretion. Just as in the Garden, Satan convinced people that God was a liar and that what He created as good and holy was actually impure and sinful. Their attempts to separate themselves from what they saw as corruption only led to more sin and death.

Luther also set about reforming the way the church viewed death and the spiritual care of the dying. At the time, the world was all too familiar with death. The plague was a not-so-distant memory, wars were being fought, and disease spread easily. They lived perpetually in what Luther referred to as a “vale of tears” and longed to be with God in heaven. By the 14th century, the medieval church had established a practice known as the ars moriendi or the art of dying. These were a set of instructions for how to help a dying person prepare for and have a good death. Unfortunately, by Luther’s time, these procedures included doing various good works in order to be justified and earn a way into heaven rather than depending on Christ and His atoning sacrifice for them; praying to the saints or the Virgin Mary to intercede for them rather than Christ Himself; and purchasing indulgences to reduce their time in purgatory, essentially buying their way into heaven among other things. Perhaps the biggest harm caused by these teachings was that most Christians approached death with fear and uncertainty.  Once again the Word of God was twisted and people were led to believe the lies of doubt and unbelief from

Satan rather than the promises of forgiveness in Christ. Luther wrote extensively on the topic and would gradually develop new liturgies and change these false practices, presenting a biblical view of death and how to die well. This would include exhorting Christians to hope in Christ, encouraging them to see God as a gracious and loving Father, and pointing to the sacraments as assurance of God’s favor toward them. In his well-known sermon, On Preparing to Die, Luther writes that “Christ is nothing other than sheer life…” and “Seek yourself only in Christ and not in yourself and you will find yourself in him eternally.” And in his lectures in Genesis he encourages the believer to faith, saying, “By faith the Christian is made the victor over sin, over the Law, and over death, so that not even the gates of hell can prevail against him.” Luther points the dying Christian to Christ, who is life, assuring them that in Him they rest securely.

Christians still today live in a culture which both fears and propagates death, spreading lies just as Satan did in the Garden of Eden. Like Eve, many choose to agree with Satan rather than believing the Word of God concerning life and death. Thanks be to God that even in death and unbelief He gave Eve–and us–His life, which is nothing less than eternal life. The promise that the serpent’s head would be crushed and death would be destroyed gave them the hope which gives life to all Christians. As Martin Luther summed up, “Thus Adam was also revived by this address of the Lord not perfectly indeed, for the life which he lost he did not yet recover; but he got the hope of that life when he heard that Satan’s tyranny was to be crushed.”