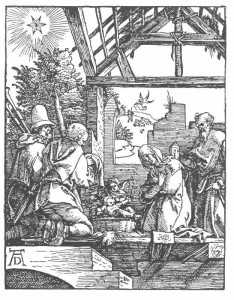 Luther had much more to say about Mary, the mother of our Lord, than her husband Joseph. This is hardly surprising given that much of Luther’s comments on Joseph revolve around how he is not Jesus’ natural father because Jesus is conceived by the Holy Spirit and born of the Virgin Mary.[1] Even so, there are gems to glean from his comments regarding Jesus’ adoptive father. In line with the biblical teaching on how to regard the saints, Luther finds reasons to give thanks to God for His mercy toward our Lord’s guardian, to strengthen our faith by his example, and to imitate his faith and virtues.[2]

Luther has an interesting take on how God shows His mercy to, or perhaps we should say through, Joseph. Preaching on the flight of the holy family to Egypt, Luther considers Joseph and Mary to be missionaries under persecution. He writes:

There is no doubt that Mary and Joseph and perhaps others with them that had come to know the child were not silent while in Egypt over the great miracle which had occurred with this child. They preached and brought others to faith and salvation….[3]

Luther uses this episode of Mary and Joseph to teach about how the Church grows when it is under persecution, something Luther found comforting during his day and which we can also appreciate now.

The same still happens today. When the tyrants rage against the Gospel, they do no more than blow into the ashes whereby the fire grows and the ashes invade their eyes. This is what befalls their tyranny: When they spill innocent blood, this blood of Christians becomes like dung which fertilizes the field so that it is enriched and yields a good crop. Through persecution Christianity grows, but where peace and tranquility prevail, there Christians become lazy and idle.[4]

Our faith can also be strengthened by Joseph’s example. Luther considers how our Lord’s guardian let his guard down and lost track of Jesus. In a sermon on Luke 2:41-52, Jesus in the temple as a boy, Luther writes that since Joseph “had received a solemn mandate to care for the child…. it was a great fright and an especial heartache when they could not locate the child.” Luther goes on in detail:

There was no sleeping, no eating, no resting, only tears. We assume that they ran back that same night several miles, but the child was gone. Just imagine what their hearts were telling them. The first day the child was lost and they were unaware of it; the second day they looked and failed to find the child; finally, on the third day they found him. Many thoughts went through their minds those three nights when they were unable to sleep….Joseph…could well have thought, God no longer wants you as a foster parent since you have been negligent in the care of this child who is God’s Son and was entrusted to your care by God.[5]

The reason this serves to strengthen our faith is because of God’s care even in the midst of our own dereliction of duty. In another sermon on the same text Luther writes:

When we see that the Virgin Mary [and Joseph] and other saints have also suffered, we are thereby comforted and need not despair, for their example shows that we should calmly and patiently wait until God comes and strengthens us.”[6]

Luther eventually addresses the “true reason” God permits such things to happen. It ought to come as no surprise that he guides us through Joseph’s suffering to Christ and His Word:

[God permits such things] in order that he may teach his saints to seek true comfort and prepare themselves that they may find Christ and keep him. The principal part of this Gospel Lesson is to teach us how and where we are to seek and find Christ. So the text says that Mary and Joseph sought the child Jesus for three days without finding him, neither in Jerusalem, nor among their friends and acquaintances, until they came to the temple where he sat among the teachers and where the Scriptures and God’s Word are studied.[7] 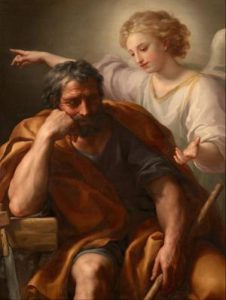 Joseph’s virtue is also for us to imitate. It is evident in how he responds to the news that his betrothed, Mary, is pregnant. Luther writes, “He wanted to divorce Mary quietly so as not to put her to shame and for this reason is praised as being a just man.”[8] Again, Luther writes that though Joseph had the right of “registering a complaint against [Mary] and having her executed,” yet “he is praised for being ‘resolved to divorce her quietly.’”[9] Not only is this an excellent example of how to follow the Eighth Commandment when we believe we have been sinned against, but Luther also finds great wisdom here for one whose spouse has committed adultery. While neither commending nor forbidding divorce in such a case, Luther writes:

If the adultery is clandestine, of course, the husband has the right to follow either of two courses. First, he may rebuke his wife privately and in a brotherly fashion, and keep her if she will mend her ways. Second, he may divorce her, as Joseph wished to do. The same principle applies in the case of a wife with an adulterous husband. These two types of discipline are both Christian and laudable.[10]

Like his virtue, so too is Joseph’s faith imitable. As we well know, he did not divorce Mary but remained with her and became Jesus’ legal guardian. This was because the angel told him to take Mary as his wife since her child was from the Holy Spirit. Luther comments that “Joseph had nothing to go by save the Word of God and he accepted it. A godless man would have said it was just a dream, but Joseph believed the word of God and took unto him his wife.”[11] Thus, he is for us an emblem of faith and virtue. 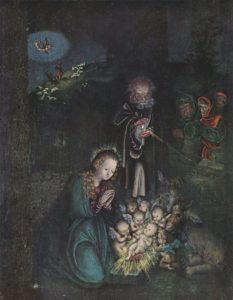 Though the Reformer’s words regarding the guardian of our Lord are not as plenteous as his words on his wife, Mary, still there are in him–and every saint of God–opportunity to see God’s mercy at work, to strengthen our faith in His providential care and grace, and to “follow the example of their faith and good works, according to our calling.”[12]

[1] “But now listen to the angel’s words. “Take the child,” he says, “and his mother.” Not, Take your child, whose father you are, but simply, “Take the child and his mother,” acknowledging the child’s mother alone. He spoke in the same manner in an earlier passage, where he had also appeared to Joseph in a dream (Matt. 1:20), and said: “Fear not to take unto thee Mary thy wife: for that which is conceived in her is of the Holy Ghost.” From then on he places the child first and the mother second. Now one ought to put father and mother first according to the fourth commandment; but because the angel mentions the child first and the mother second, he means to say that the child is the mother’s God and Lord, and yet calls Mary his mother. It follows from this that this child is true God, but also at the same time truly man by nature, yet conceived without sin by the Holy Spirit, and born of a virgin.” “Complete Sermons of Martin Luther,” Volume 7, 260.

[2] The biblical position on how to regard the saints is clearly stated in the Apology of the Augsburg Confession: “Our Confession approves honoring the saints in three ways. The first is thanksgiving. We should thank God because He has shown examples of mercy, because He wishes to save people, and because He has given teachers and other gifts to the Church. These gifts, since they are the greatest, should be amplified. The saints themselves, who have faithfully used these gifts, should be praised just as Christ praises faithful businessmen (Matthew 25:21, 23). The second service is the strengthening of our faith. When we see Peter’s denial forgiven, we also are encouraged to believe all the more that grace truly superabounds over sin (Romans 5:20). The third honor is the imitation, first of faith, then of the other virtues. Everyone should imitate the saints according to his calling.” (Ap. XXI, 4-6)

[3] Quoted in “The Church Comes from All Nations: Luther Texts on Mission,” by Volker Stolle, translated by Klaus Detlev Schulz, 18.

[10] AE 45:31–32. Luther writes elsewhere: “And because God has commanded in the law of Moses that adulterers should be stoned [Deut. 22:22–24], it is certain that adultery also dissolves a marriage, because by it the adulterer is sentenced and condemned to death, and also because Christ, in Matthew 19 [:9], when he forbids married people to divorce each other, excepts adultery and says, “Whoever divorces his wife, except for unchastity, and marries another, commits adultery.” This verse is also confirmed by Joseph in Matthew 2 [1:19], when he wanted to leave Mary because he considered her an adulteress, and yet he is praised by the evangelist as a pious man. Now he certainly would not be a pious man if he wanted to leave Mary unless he had the power and right to do so.

“Accordingly I cannot and may not deny that where one spouse commits adultery and it can be publicly proven, the other partner is free and can obtain a divorce and marry another man. However, it is a great deal better to reconcile them and keep them together if it is possible. But if the innocent partner does not wish to do this, then let him in God’s name exercise his right. And above all, this separation is not to take place on one’s own authority, but it is to be declared through the advice and judgment of the pastor or authorities, unless like Joseph one wanted to go away secretly and leave the country. Otherwise, if he wishes to stay, he is to obtain a public divorce.” AE 46:311.