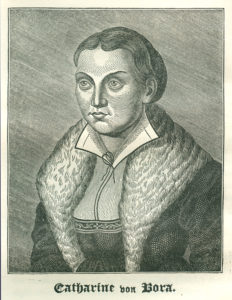 Katharina von Bora is most famous for being the wife of Martin Luther. Traditionally, sources have suggested she was born in 1499. Nevertheless, because early modern Europe was lacking in birth certificates, there is no direct evidence of this. There is also something of a dispute about the location of her birth. Some sources state that she was born in Lippendorf, while some modern historians have suggested that her place of birth was actually Hirschfeld.

The first concrete evidence that we have of von Bora’s life is her entry into the Benedictine cloister at Brehna in 1504. She was placed there by her father for the sake of furthering her education. Later, as a teenager she was moved to a Cistercian monastery where her aunt resided. There she eventually became a nun.

As a young woman, von Bora became increasingly unhappy with the monastic life and interested in the Church reform movement that was afoot in Germany. As a result, in 1523 von Bora and a number of her friends eventually contacted Luther and asked for his help in escaping their monastery. This was an extremely dangerous undertaking in the sixteenth century. A person caught abandoning their monastic vows could be tortured and imprisoned for the rest of their lives.

Luther employed a sympathetic merchant to help smuggle Katharina and her friends out of the monastery on Easter Eve of 1523. Some sources say that Katherina escaped by hiding in a barrel used to transport herring, although this is disputed. When they first arrived in Wittenberg, Luther tried return the women to their families. This proved to be an unworkable solution, since none of their families would have them returned. Indeed, aiding and abetting a runaway nun was a violation of Roman Catholic canon law and therefore a grave crime in the sixteenth century.

For this reason, Luther decided to find husbands for the women in accordance with their wishes. Katharina was difficult to find a husband for, since she did not find many of her suitors acceptable. Finally she made it known that she would be willing to marry either Nicholas von Amsdorf (a university colleague of Luther’s), or Luther himself. After some resistance, Luther finally agreed to marry Katharina in 1525.  He was forty-one years old and she was twenty-five. 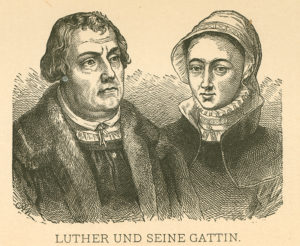 Many of Luther’s colleagues (including Philipp Melanchthon) were against his marriage on the grounds that this decision would simply confirm the claims of some Roman Catholic critics that he had started the Reformation as a way to avoid fulfilling his vow of celibacy. Luther explained that he agreed to marry Katharina in order to please his father, and to spite the devil and the pope. Indeed, Luther saw the devil as attacking creation and its orders (family, church, state) by drawing people away from their status as creatures and towards a desire to be God. Justification by faith was understood by Luther as freeing people to enjoy their status as creatures and their vocation within the created orders. Within these, marriage was most central. Consequently it was up to him to give a good example to the Church he was trying to reform.

After Luther and Katharina were married, they moved into the Black Cloister. The Black Cloister was the former Augustinian monastery in which Luther had lived as a friar and was a gift to the Luther family from the ducal family of Saxony. The Black Cloister possessed vast holdings of cattle and pigs, as well as a brewery. Katharina took over management of these holdings and worked as a businesswoman of a sort. Because of this, von Bora has not infrequently been held up as the model of a dutiful Christian housewife.But that is only part of the story. Prior to the nineteenth century, economic production and the life of the household were actually not separate from one another. Therefore women’s roles as managers of a household was inevitably tied up in the role as both economic producers and managers. Beyond her work as an entrepreneur and housewife, Katharina also bore six children to Luther. She also took care of four adopted children.

After Luther’s death in 1546, Katharina entered a period of serious financial trouble. As a result of her husband’s death, she lost the income from his salary. Since the ducal family of Saxony was defeated and imprisoned as a result of the Smalkaldic War, it was impossible for Katharina to turn to them for assistance. During the period of the Augsburg and Leipzig Interims, Katharina left Wittenberg and took refuge in the city of Magdeburg, which continued resistance against the Emperor. After the Lutheran princes were again triumphant, she returned to Wittenberg to find her house and property almost completely destroyed. In spite of this, she insisted on remaining there. She was finally able to sustain herself as a result of the financial generosity of the elector Johann Friedrich.

Nevertheless, by 1552 the situation in Wittenberg again became dire. The yearly crops failed and there was an outbreak of the plague. Katharina escaped to the city of Torgau, where she was unfortunately involved in a deadly cart accident at the city gates. Although she held onto life for three months, she eventually died at the age of 53.

Although Katharina’s life was full of many pains and struggles, she displayed a great deal of courage and fortitude in the face of them. These virtues would not have been possible without her faith in the Gospel, which freed her to follow her vocation as a wife, mother, and entrepreneur. As such, she serves as a great model of faith for both men and women in the contemporary Church.