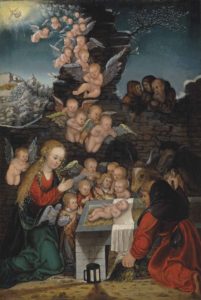 I grew up attending Trinity Lutheran School in Clinton Township, Michigan. Every year the children of the school presented a Christmas program. It was a little different each year, but one part was always the same: the kindergarten angels.

Every year the kindergarten students would dress in white robes with cardboard wings and tinsel halos. At some point in the program they would gather around the altar for the singing of “Angels We have Heard on High.” When it came to the refrain, all their little voices would belt out, “Gloria in excelsis Deo!” Glory to God in the highest!

The use of the Gloria in Excelsis in the liturgy goes back to the second century as Pope Telesphorus (126-139 AD) mandated its use in the Christmas Eve service. By the fourth century, a short hymn was composed to sing after the words of Luke 2:14, first in Greek, and later translated in Latin.[1] Eventually this hymn was used every week in the service, immediately following the Kyrie eleison (“Lord, have mercy”). The English translation used for LSB Divine Service 3 appears as follows:

We praise Thee, we bless Thee, we worship Thee,

We glorify Thee, we give thanks to Thee, for Thy great glory.

O Lord God, Lamb of God, Son of the Father,

That takest away the sin of the world, have mercy upon us.

Thou that takest away the sin of the world, receive our prayer.

Thou that sittest at the right hand of God the Father, have mercy upon us.

Thou only, O Christ, with the Holy Ghost, art most high in the glory of God the Father. 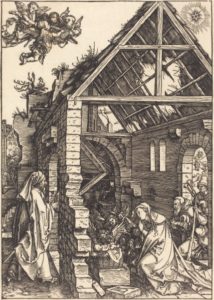 The Lutheran Reformers generally continued the tradition of singing the Gloria in Excelsis after the Kyrie. When Luther made his first revision of the order of the Mass in 1523, he wrote, “[W]e accept the Kyrie eleison in the form in which it has been used until now, with the various melodies for different seasons, together with the Angelic Hymn, Gloria in Excelsis, which follows it. However, the bishop may decide to omit the later as often as he wishes.”[2]

While Luther does not even mention the Gloria in Excelsis in his German Mass (1526), a German version of the Gloria in Excelsis was later attributed to him, probably written around 1537.[3] This hymn appears in English as “All Glory Be to God Alone” (LSB 948). The music closely resembles the Latin chant from the Roman rite. It was originally intended to be sung antiphonally, often with the boys’ choir and the congregation alternating verses.

Another German paraphrase of the Gloria in Excelsis was written by Nicolaus Decius around this same time. He published a Low German version in 1525 and a High German version in 1539. This hymn is translated into English as “All Glory Be to God on High” (LSB 947), and is probably the best known hymn setting of the Gloria in Excelsis in the Lutheran tradition. The tune is also attributed to Decius, and its triple meter has earned it the nickname, “The Lutheran Waltz.”[4]

When you sing the Gloria in Excelsis, whether it is Christmas time or not, you are singing along with the angels who announced Jesus’ birth many years ago. Just as Jesus was present in the manger in Bethlehem, so He is present with us in His body and blood upon the altar. Jesus comes to bring you peace on earth through His death on the cross, by which you have forgiveness of sins and everlasting life.

[3] For further discussion on the authorship of this hymn, see Ulrich S. Leopold’s introduction in LW 53:184-86.