Anyone who has spent any small amount of time studying the history of the Reformation, or likewise the origin of Protestant Churches in America, has encountered the name of John Calvin. Calvin is considered by some the one who codified the Reformation in the form that it finally took and is considered by the same to be the truly premier theologian of the era. So, who is Calvin, and what should we think of him as Lutherans? What did Luther think of him?

To begin, it must be understood that Calvin is considered a member of the second generation of the Reformation. He was born in Noyon, France in 1509. This meant that he was only eight years old when The Ninety-Five Thesis hit the printing presses and received their widespread distribution. Calvin’s own earliest publications were not printed until the 1530’s—the first actually being a commentary on Seneca’s De Clementia in 1532. Calvin’s earliest Christian writing was a work against the Anabaptists and their understanding of the soul sleeping until Christ’s return, a work entitled Psychopannichia, which he penned in 1534. However, it was in 1536 that he began to gain some notoriety. In that year, at the age of 27, he released his first edition of the Institutes of the Christian Religion. He continued updating them until the magnum opus of his last Latin edition in 1559 and a French translation which followed in 1560.

You might notice that the first edition of the Institutes was published well before Luther’s death in 1546, which may lead you to wonder if the two ever met. After all, Luther met fellow Reformer, Zuricher Ulrich Zwingli at the Marburg Colloquy in 1529. He also met the Strasburgeois Martin Bucer multiple times. So, did Luther ever meet Calvin? There is no record that they met face to face. Calvin did meet Philip Melanchthon, though, in 1541 and the two remained on very friendly terms for many years. In fact, utilizing this friendship, Calvin sent a letter to Luther via Melanchthon which Philip never delivered for fear of Luther’s reaction.

In light of this, you might be also wondering if Luther even knew of Calvin. He did. Calvin’s name comes up in Luther’s writings and table talks a handful of times, the earliest of those that we still have being in 1539 when in a letter to Bucer, Luther praises a book from Calvin. However, the table talks reveal that over the course of time Luther’s view did not remain quite so positive toward him. It is recorded that Luther later said that Calvin was “educated, but strongly suspected of the error of the Sacramentarians.”[1] That is, that Calvin did not believe the same things regarding the Lord’s Supper as the Lutheran Reformers.

In this it appears that in Luther’s grand biography Calvin does not receive a great deal of mention. For Luther, Calvin would appear perhaps as a footnote. But for Calvin’s biography, Luther would receive significant mention. Many biographers note that Calvin saw himself as significantly closer to the Lutherans than the Zwinglians, and even more so than the Anabaptists. As mentioned before, Calvin had a writing explicitly contradicting the Anabaptists very early in his career. Likewise, biographer Francois Wendel notes that Calvin looked upon Zwingli “as only a second-rate theologian.”[2] Zwingli, to Calvin, was “too contaminated by the ‘philosophers’, too ‘profane’, and also too fond of paradoxes.”[3]

Knowing this, you might think that perhaps we as Lutherans would be inclined to view Calvin quite favorably. Calvin was indeed a man of amazing intellect. He was extremely well-read and his capability for reasoning, explanation, and theologizing was extraordinary. However, as was hinted by Luther, there should be reservations. 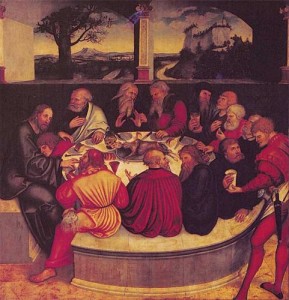 As Lutherans we still have that same concern today. In particular, the way we often distinguish ourselves in terms of defining whether Christ is truly present in the Sacrament is by asking the question as to whether He is present even for those who don’t believe. If one says yes, then this is the Lutheran understanding of presence. Calvin could not say that.

Additionally, when looking at Calvin, you may be familiar with a couple of other concerns. The most important, which relates to the Lord’s Supper, is Calvin’s understanding that when it comes to the two natures of Jesus—God and Man—the divinity is not entirely contained within the humanity. We say that it is (Colossians 2:9 – “For in him the whole fullness of deity dwells bodily”). Calvin said that it could not be: “Even if the Word in his immeasurable essence united with the nature of man into one person, we do not imagine that he was confined therein.”[4] Also, we say that the reason Christ is present in the Lord’s Supper is because the body of Christ is united to the divinity in such a way that God is capable of making the body of Christ omnipresent (cf. Ephesians 1:22-23 – “And he put all things under his feet and gave him as head over all things to the church, which is his body, the fullness of him who fills all in all.”).  All the more is this presence found in the Lord’s Supper. Using Acts 3:21, which speaks of Jesus, “whom heaven must receive until the time for restoring all the things about which God spoke by the mouth of his holy prophets long ago,” Calvin says that this body must be only in heaven, keeping that form, because “it is the true nature of a body to be contained in space, to have its own dimensions and its own shape.”[5] These seem like abstract and trivial things, but in the end they are quite important for understanding who our God is and how He is the God who created all things, still using that creation to bring about the Spiritual and eternal work of our salvation.

Of course, there are also the more famous concerns Lutherans have with Calvin. The first and foremost of these is his understanding of predestination. According to Calvin, God predestines, choosing before time, those who are going to heaven and those who are going to hell. This is His eternal decree. For us as Lutherans, simply put, we say that God indeed chooses the number of the elect, those being saved. However, man is condemned of his own sinfulness, not because God wills or chooses them to be. Second, we have a slightly different understanding of God’s commands. For us, the law most importantly exists as a mirror to point out our sin. Does this law also help to curb sin in our world? Yes, definitely. Does it exist to help us as Christians to know how to live? Absolutely, it informs us in our new life in Christ as to God’s will for us. However, most importantly we are to hear the law that we would see our sin and despair of any trust of our own goodness. Rather, it should drive us to the Gospel, to Christ alone for salvation. For Calvin, the mirror use of the Law, as we call it, is certainly important. We should always be driven to Christ. However, the third is the primary use. As we are given new life in Christ this is toward the goal that we would now be able to keep the Law before God. Is keeping the Law a bad thing for us as Lutherans? In no way! But so that we may always see our life as given in the Gospel, the Law serves the Gospel.

Finally, the aspect that might be subtle but bears great consequence, is to understand that Calvin often emphasizes God’s ineffable majesty and His glory as central to who God is. This is good, but for us as Lutherans, the glory of God is found nowhere more manifest than the cross of Christ. In that revelation, we see the love of God, we see the God whose majesty is found not merely in ineffable light, but in the light of love shining through the darkness of Calvary.

As we consider Calvin then, I have to make clear that I have only been pointing out the differences, the concerns that Luther and the later Lutherans had with him, and that we have today. To be fair, we do have to acknowledge Calvin’s acumen and his skill as a thinker and theologian. His intelligence and capability far surpass our own in many and sundry ways, as do his biblical and literary knowledge. In fact, we must even acknowledge how biblical a theologian Calvin was in many ways. But as we conclude looking at him, we should ask always for discernment, seeing where we can agree with Calvin’s teaching. All the while, though, we should ask the Lord to guard us in our study of His Word. In that prayer, we seek for Him to keep us always steadfast in that Word and that Word alone.