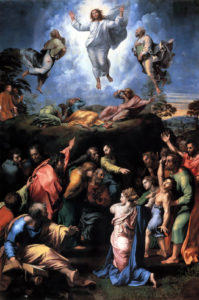 To consider Christ’s glorious Transfiguration on its own is eye-opening; to hear how Luther describes this glory as yours nearly bursts the eyes from their sockets, bringing hope to the Christian heart. Luther’s use of the Transfiguration to teach the hope we have in the resurrection of the body is truly wonderful, for when you hear the vivid picture of how Jesus’ “face shone like the sun, and his clothes became white as light” (Matthew 17:2), Luther would have you see what this means for your eternal good:

The resurrection of the dead and the future glory and brightness of our bodies are shown. For this was something very remarkable, that Christ was transfigured while yet in the mortal body, which was subject to suffering. What then shall it be, when mortality shall have been swallowed up, and nothing shall remain but immortality and glory?[1]

What a thought! As glorious as the Transfiguration was, yet since Christ was still subject to suffering, it is not even the full picture! Jesus gives but a sneak-peek of what will be. Now that He is crucified and risen, death no longer having dominion over Him, you have hope of the same immortal glory as your Lord.

The hope of another life beyond the present life is quite comforting, especially as we suffer. Luther elaborates on this when discussing what Moses and Elijah appearing with Jesus teaches: “There is added the appearance of Moses and Elias, who prove by their appearing that they had never really died, and that there is yet another life, besides the earthly life, from which they were transferred.” [2] 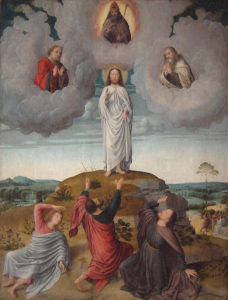 While Luther also sees Moses and Elijah appearing “in order to testify that Jesus Christ is truly the promised Messiah, according to the law (i.e. Moses), and the prophets, (i.e. Elias),” his concentration here is on the comfort of the life to come, the hope that the faithful have after this present life of labor is over. Just as the Transfiguration testifies to this truth for Moses and Elijah, so too is this your hope, to be transferred from this life of sorrow to life immortal with Jesus and all the saints.

With the hope Jesus’ Transfiguration brings, Luther says, we are able to look at death in a different light:

This appearance teaches us also that we should despise death, and look upon it merely as an emigration or a sleep. In short, this appearance proves that this life is nothing at all in comparison with the future life.[3]

What do you have to fear in death when Jesus shines like the sun for you and is white as light to enlighten you to what He has done on your behalf? No, there is nothing to fear in life or death when you compare it to the future life our Father has in store for you through Jesus Christ, our Lord.

From where does such certainty come? Luther writes, “This appearance proves that sin is overcome. For it necessarily follows as an incontrovertible conclusion, that, where death is overcome, there sin is also overcome.” [4]

The Gospel shines forth in the Transfiguration since it previews Jesus’ resurrection, which guarantees that His death truly did atone for the sin of the world. Never one to bypass the salvation of Christ’s cross, Luther proclaims what Jesus, Moses, and Elijah were discussing together on the Mount of Transfiguration: His exodus from this earth via His crucifixion (cf. Luke 9:31). The fact that Christ foreshadows His future resurrection is a testimony that the cross cannot keep Christ down. Rather, He overcame death and sin and He did it for you and for all.

Jesus was transfigured before three disciples. Why? To strengthen them in the faith. Luther says:

But he permitted those three mentioned apostles especially to see this appearance, in order to guard them against the coming offense of his cross and crucifixion. Yet he accomplished little thereby, for they all were offended with him. Yet this appearance had its advantage after the resurrection, and served to strengthen their faith in Christ, that he was the Son of the living God, and that his kingdom must be regarded in a spiritual sense.[5]

This indeed strengthened the disciples after the resurrection, most evidently St. Peter, who wrote that they heard the voice of God the Father say about Jesus, “This is my beloved Son, with whom I am well pleased” (2 Peter 1:17). This encouraged them to continue to confess Christ even to death. St. Peter goes on to encourage you when he writes that in Scripture you have a “more sure word,” one which “you will do well to pay attention as to a lamp shining in a dark place, until the day dawns and the morning star rises in your hearts” (2 Peter 1:19).

Luther’s treatment of the Transfiguration finally focuses on the Holy Trinity. “The whole, holy Trinity appears here to strengthen the believers; namely, Christ in his transfigured form, the Father in the voice, and the Holy Ghost in the bright cloud.”[6] In your baptized life you are learning more and more who your Triune God is, how He works for your good, three Persons in one divine unity.

The Transfiguration of our Lord is an apt portion of Scripture to consider before Lent begins since we get a sneak-peek at the resurrection before we head into the season of repentance that leads to Easter. Let Luther’s treatment give you hope in the midst of Lent, reminding you of Christ’s resurrection and your own.