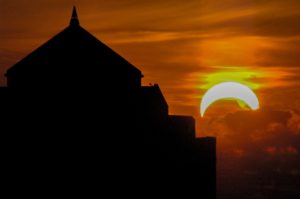 Have you ever asked God for a sign? You’re not alone. Not only have illustrious figures from the Bible asked for a sign, but I’m sure that millions of Americans have asked for a peculiar manifestation of the Divine Will, whether they are dreams, occurrences, or feelings. These people want the same thing: certainty. I want to know for sure that God is with me. But that’s not the only reason why people look for heavenly signs. Many Americans see particular election outcomes or natural phenomena as an indication of the end of days, corresponding to certain passages in Revelation.

While he reclined at meal with his family and friends, Luther also discussed portents. Luther seemed to contradict himself concerning portents. Because of signs in the heavens and on earth, Luther claimed that the end was near: “The Last Day is at hand. My calendar has run out. I know nothing more in my Scriptures. All the firmaments and the course of the heavens are slowing down and approaching the end. For a whole year the Elbe has remained at the same level, and this, too, is a portent.”[1]

Luther also ascribed certain omens and occurrences to God’s disfavor and wrath. When speaking of the deaths of the Bishop of Trier, Count Ernest of Mansfeld, Count von Werdenberg, and Dr. Matthias, Luther ascribed them to God’s disfavor. “Nobody pays attention to God’s miracles. Look how the papists perish!”[2] Per Luther, God cut these men’s lives short because they were enemies of the Gospel.

But it seems difficult to reconcile Luther’s previous statements with his words concerning dreams: “I don’t pay attention to either dreams or signs. I have the Word, and that I let suffice. I don’t want an angel to come to me. I wouldn’t believe him now anyway . . . I don’t say that dreams and signs are of value at other times, nor do I care, for we already have everything we should have in the Scriptures.”[3]

How can these two positions be reconciled? Number 463 provides the key. When he interpreted Matthew 24:37-38, Luther said: “The above passage about the calamities of the last days I don’t understand to refer to physical punishment, for the text is sure: at its end the world will be very happy, powerful, proud and secure . . . Besides, the Word is also held in the greatest contempt. All these things are now happening.”[4]

Luther trusted in the Word of God alone. When he spoke of signs pointing to the end of the world, he pointed to the predictions which Scripture provides. When Luther ascribed God’s disfavor to the death of opponents, he trusted that God’s will would be done on earth as it is in heaven. In other words, Luther’s remarks concerning portents must always be subordinated to the authority and certainty of God’s Word.

Luther didn’t find certainty in signs. He found certainty in the written Word of God. You should too. Signs in heaven above are uncertain. Omens found on earth are ambiguous. How do I know that God loves me? How do I know that I am saved? I know this because God speaks to me in His clearly written Word. This was Luther’s unshakable conviction and it should be yours too. No matter what happens, the Father gave His Son so that the world might, through faith, receive everlasting life. That reality is more sure and certain than any wandering star or blood moon.